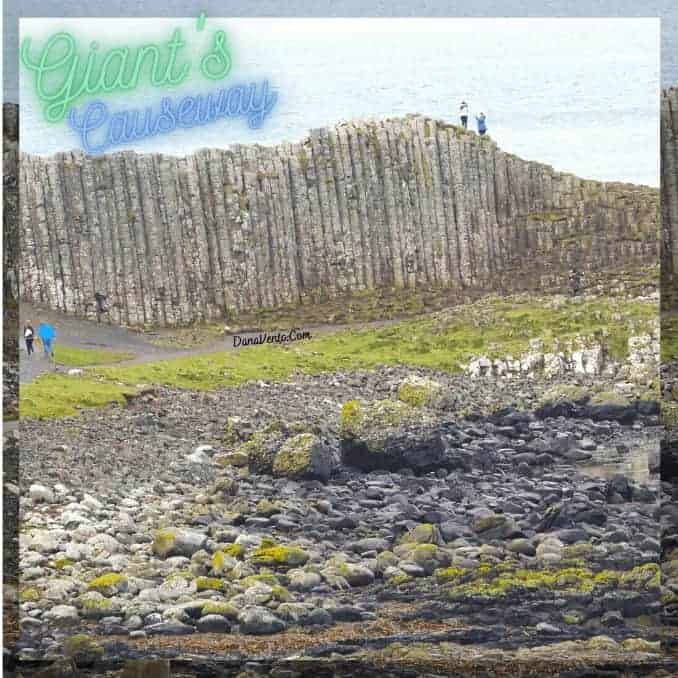 The Giant’s Causeway in Ireland is even more popular than the Cliffs of Moher!

You read my headline: 3 Insane (But True) Things About Visiting Giant’s Causeway in Ireland and had to check this read more right?

Honestly, we visited great attractions all around the country, but The Giant’s Causeway in Northern Ireland is the most magnificent in all of Ireland (IMO).

Magical stories and claims that the Giant’s Causeway was created by a Giant named Fin McCool is just the kind of a legend to lure you in.

You’ll stay because the rock formations are spectacular and unyielding even to the harshest elements of pounding seawater.

Legend, myth, science, and history all captivate and surely motivate tourists from around the world to visit what was formed some 50 million years ago!

Truly science and nature dolling out lava that rapidly cooled and created the Giant’s Causeway in Ireland that we flock to!

For time reference, my journey happened in the month of February and I’ve got to tell you there’s nothing like this caper.

From heights to history, fresh air to pulse-pounding moments, the Giant’s Causeway in Northern Ireland has it all!

Straight up, insane, yet a must-see and experience adventure for anyone that wants to see the North Antrim coastline in Ireland.

Trust me, there are 3 Insane (But True) things about visiting the Giant’s Causeway I will share with you.

While the Irish ‘dub’ the Giant’s Causeway In Northern Ireland the ‘8th Wonder of the World’ it is, in fact, a UNESCO World Heritage Site.

For me, that alone was a reason to visit, learn, and adventure, as my goal as a travel writer is to visit as many World Heritage Sites as possible when I travel.

In Ireland seeking big adventures? The Giant’s Causeway delivers big and surely is the icing on the adventure cake!

SO, buckle up, put on your hiking shoes, bundle up (if you are there in February) and bring water-repellant clothing!

Do you love grand adventures that you can traverse on foot?

Or do you prefer destination adventures that are exciting and stimulating, adventurous, and unnerving too?

You might find it odd that I titled this 3 Insane But True things About Visiting Giant’s Causeway, but hindsight is valuable.

Our experience (my husband and mine) was unimaginably great, but it also led me to a few reality checks along the way.

Adventure and discovery are what lead to fulfilling travel (IMO) and we experienced all of that and more.

As a travel writer, I will tell you, my Iconic Ireland Adventures Around The Country have been one of the best adventures to date!

Incredibly overwhelming basalt columns and folklore tales create the perfect mystique for what you are about to see!

I can’t recommend this destination enough, but there are some thoughts I’d like to express, as I feel it’s important to know.

So, let’s start uncovering information so you can plan your time at the Giant’s Causeway.

P.S. this is definitely a destination to plan out and map out before you tackle, especially if you are with a tour group, as you’ll get left behind! 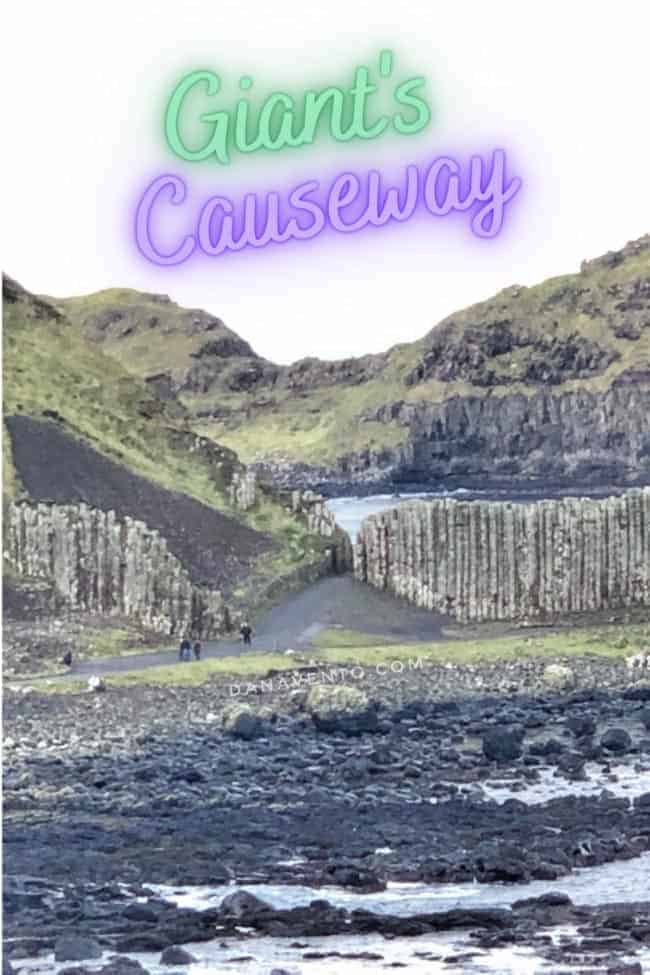 Your life may depend on it.

I am not kidding.

This is not a flip-flop destination, nor would I recommend some of the areas for smaller children.

As we adventure more and more, I can tell you, this would be the last place I would take 10 and under if you plan on walking the different landscapes.

Understanding the Power of the Giant’s Causeway In Northern Ireland

There are definitely many ways to take this sojourn, yet, I felt the way we conquered it covered a lot, yet there was so much more to see.

You may experience rain, sun, and high winds all in the same visit.

We did, and at points, I literally thought I was going to be blown over the cliff!

Sturdy walking shoes, athletic or hiking are perfect, whatever is comfortable.

Do know the paths range from dirt to squash I can’t even explain, so you may get a tad, dirty!

Totally worth it though!

#2 > Insane Things Include Walking Miles Before You Realize It 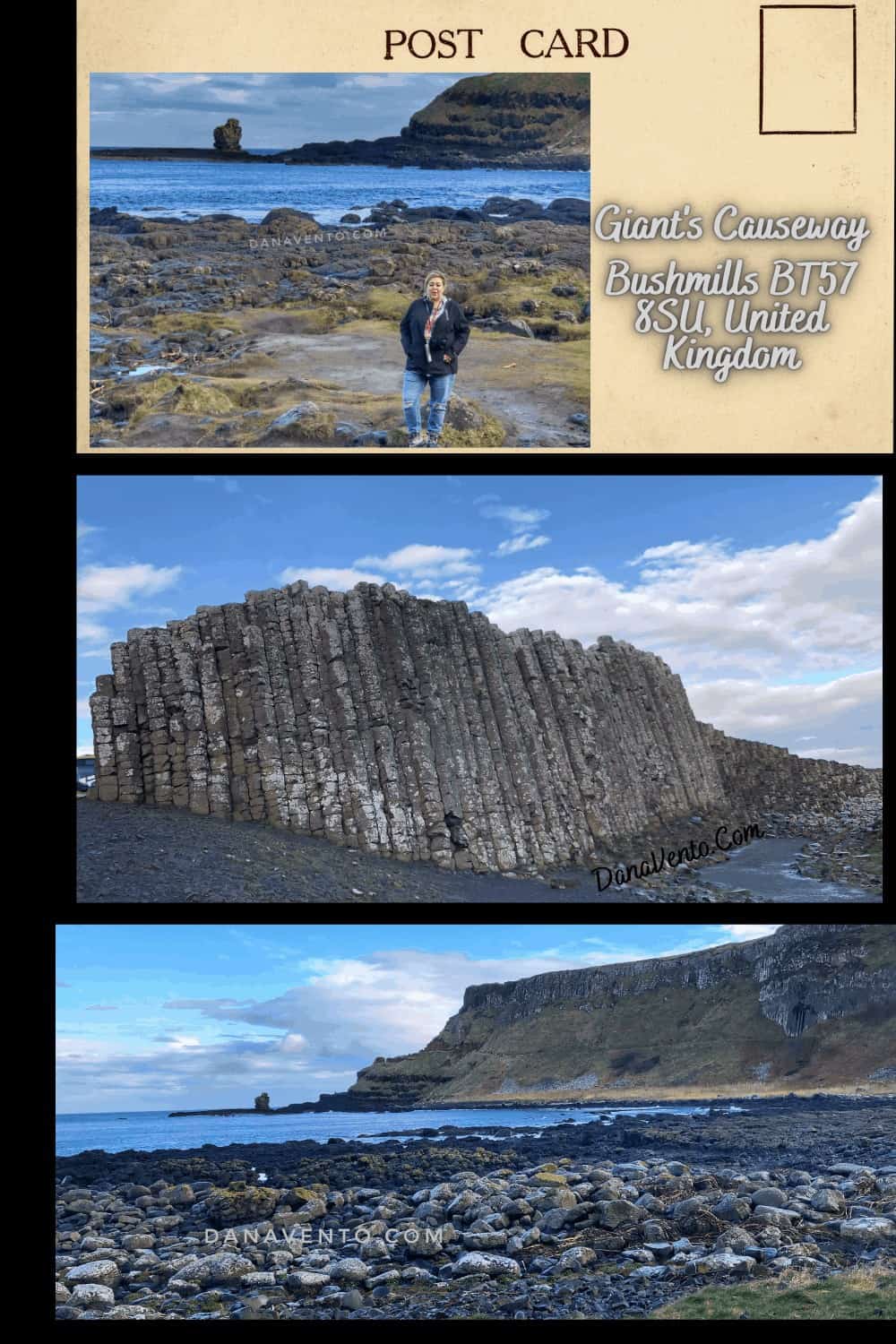 Giant’s Causeway In Northern Ireland, beginning in Basin And Insane How Much You Will Walk Before Your Adventure is Over!

We started out in the basin.

The walking trails as you can see are wet and smooshy during February.

As soon as we got to the base, we looked to our right, and we saw our first destination or at least where we wanted to go. 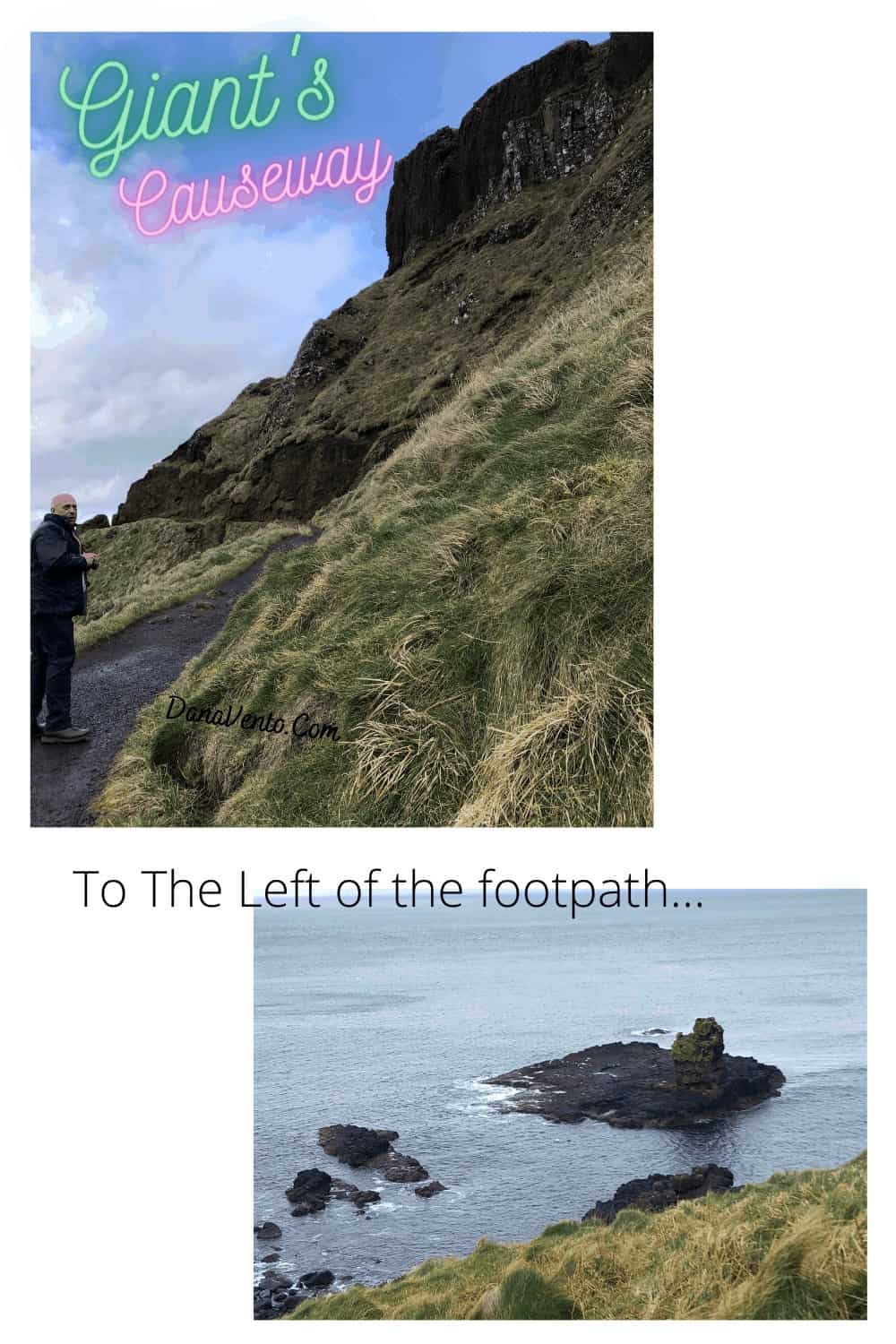 Giants Causeway Big Drops off the Footpath & No Guide Rails

It’s Unbelievable That You’ll Walk Along The Edge At This Northern Ireland Attraction.

There are no guide rails, along this pathway of the Giant’s Causeway in Northern Ireland.

However, there is a side cliff and below, well, you don’t want to find out.

As insane things go, I will say that after the initial path we took, this is nowhere I would EVER take my kids unless they were above 10, and understand boundaries.

It’s dangerous, offers complicated footing, and at times, the wind that catches you by surprise, insane but true. (Again we visited in February maybe other times are different!)

Now, this is the second destination in Ireland I might not bring children to, yet, it’s awesome!?

Tours leave without their people, and if you have traversed too far, you may not have a ride.

So, calculate your time at the Giant’s Causeway, snap a ton of photos and keep moving.

Sorry, time is precious little if you are on a tour and you gotta move yo butt, literally!

Walking Paths Are Not Kid-Friendly & Steep!

Our guides constantly reminded us of wind gusts, slippery conditions, and no to be the ‘tourist named Chance.’

We abided, and I think my heart would have been in my mouth bringing our kids along these trails.

I even question the fact that I walked on some of them with the weather at hand, yet, oh is the terrain seductive and navigatable providing you stay on the path closer to the pillars. 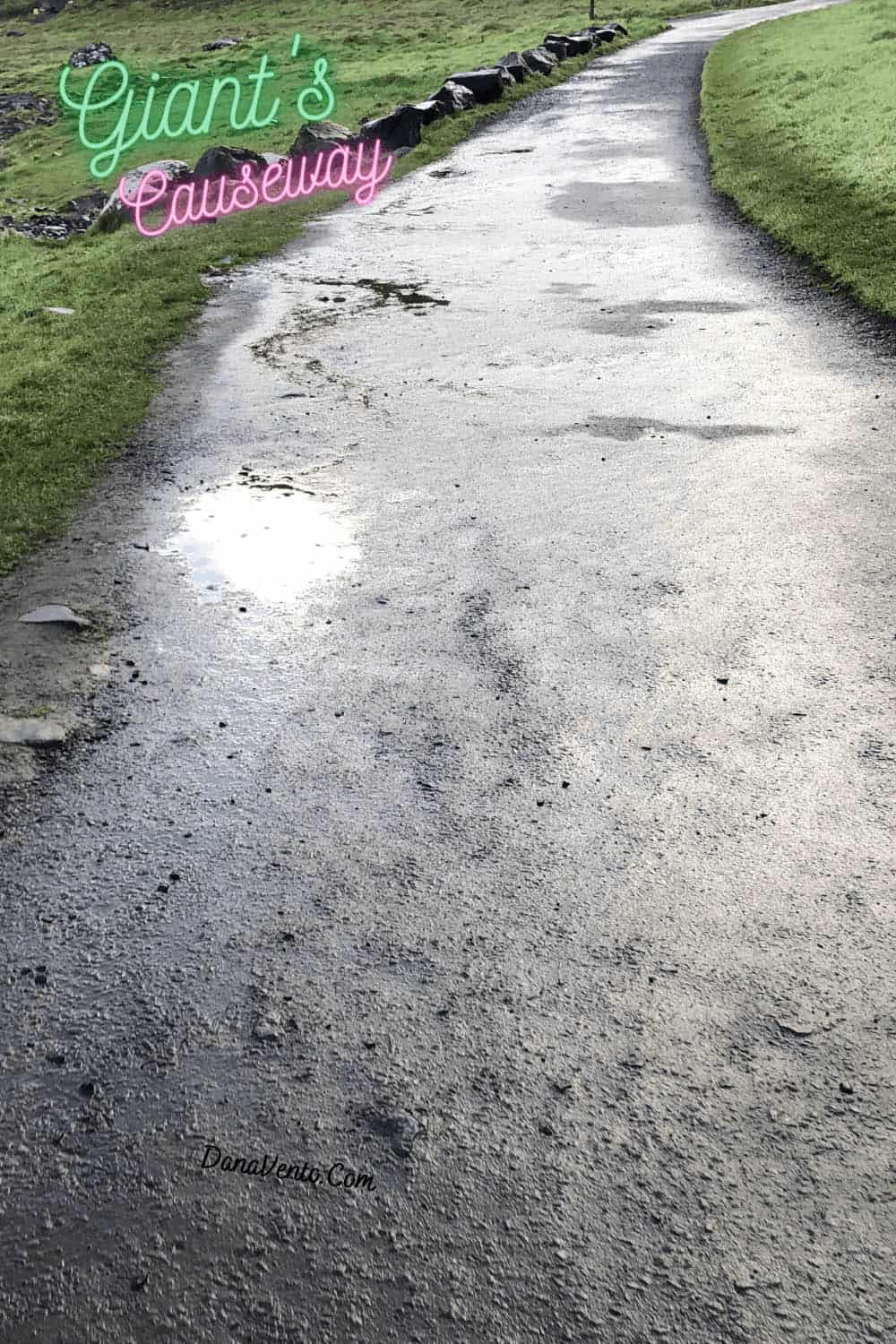 Once we started on the trail, the wind gusts were ferocious.

In fact, all of Ireland seemed to be a bit brisk in February and it reminded me of the Cliffs of Moher but more intense.

We started as you can see with sunny skies.

Quickly and aggressively the weather changed.

The further we hiked up the side of the Giant’s Causeway, the worse it became.

Thankfully, I had planned this trip to the Giant’s Causeway in Northern Ireland out ahead of time and put on my favorite waterproof boots! 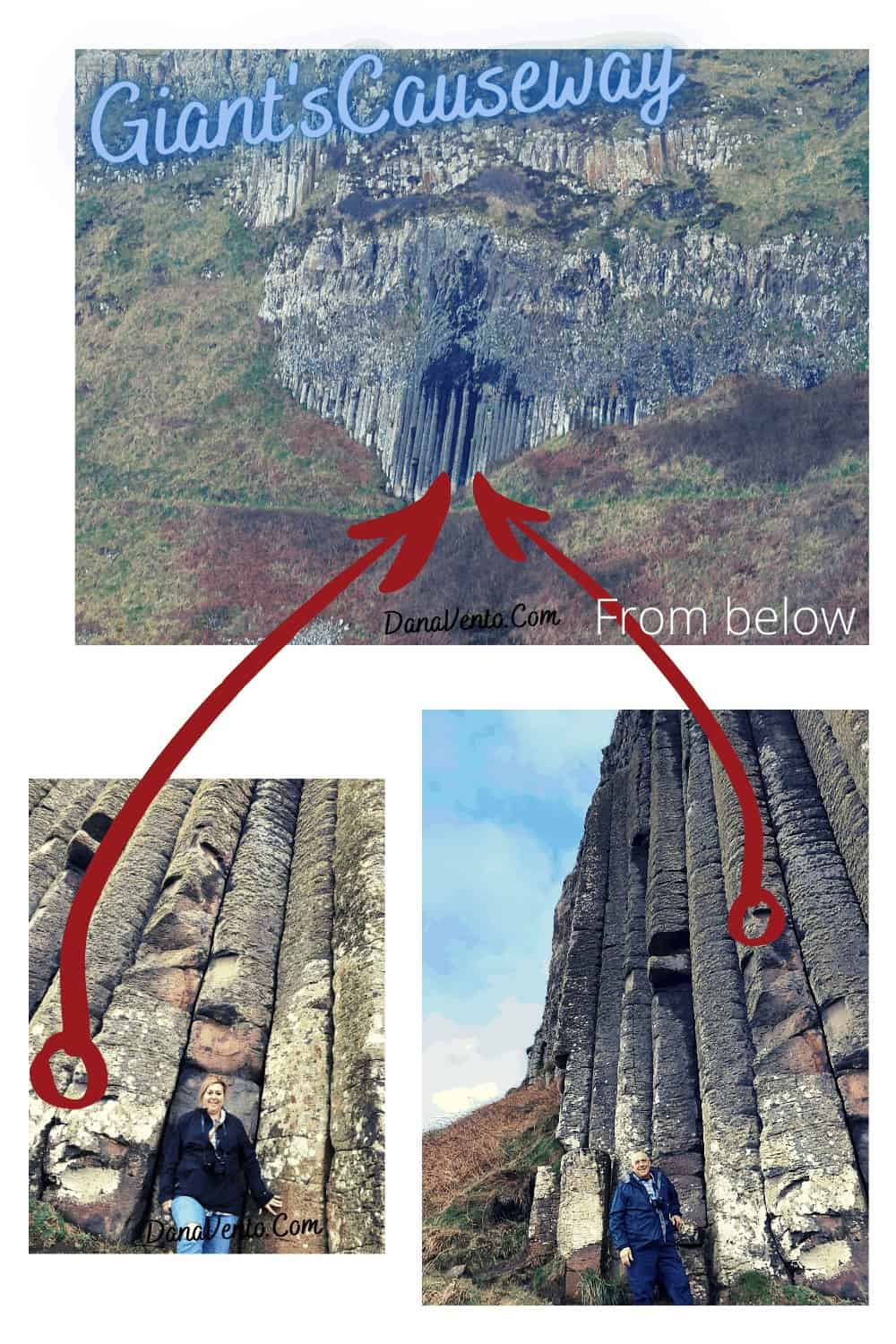 To see the pillars and stand by them is surreal and we stopped.

Insanely perfect to experience this and yet my craving for more seemed to intensify with each step.

We were so lucky to be so close.

I’ll call this our ‘In Ireland’ blessing.

Sometimes it is raining too much and you can’t take the trail.

Add that to the wind and it’s just a hot mess.

But, with blue skies, Ireland seemed to be beckoning us to walk a bit and we took off.

However, that all changes rapidly or at least it did for us.

No guide rails to hold on to, and pathways that were ‘wet’, and the width may be good for 2 people side by side at best.

Where you see the 2 people, that ‘edge’ is complicated, drafty to say the least and while a great vantage point, it’s DANGEROUS.

Note, they are back to back because the Giant’s Causeway in Northern Ireland dishes out some kick-ass wind along the edges where they are and we were!

The reality is, that around the bend you can’t go any further, and that is where the guide rail actually starts, go figure!

TIP: Sadly, blustery or not, your best photo of below in the Giant’s Causeway in Ireland is snapped here. 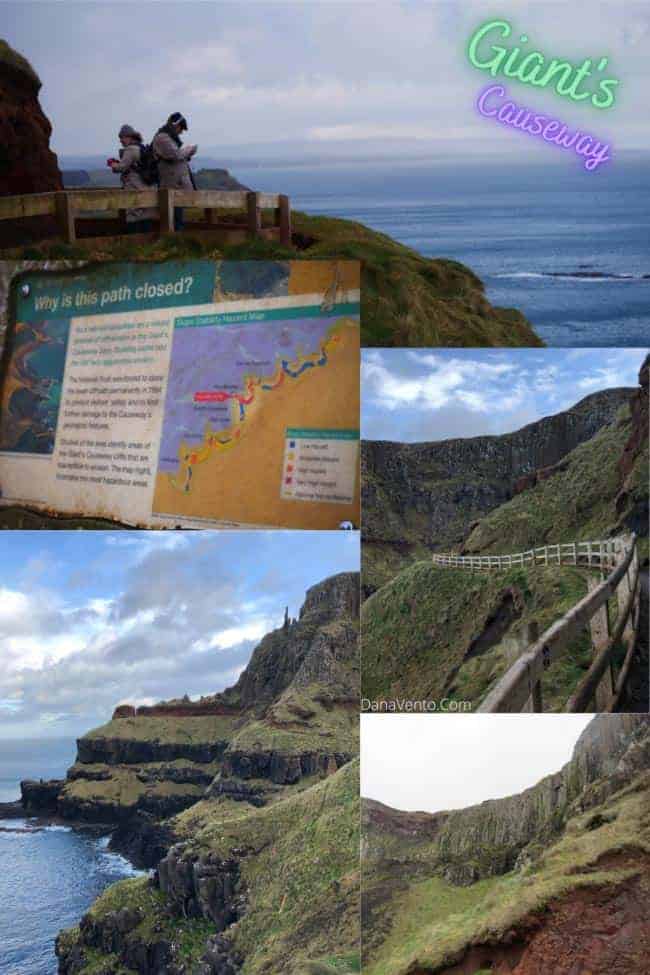 Giant’s Causeway from path closed, and blustery close to the end of the OPEN pathway with great vantage for photos.

So What Did We Do At The Giant’s Causeway In Ireland When We Go to The CLOSED Path sign?

However, once we rounded this bend I totally did not want to go around (it was a bit difficult), we stopped. 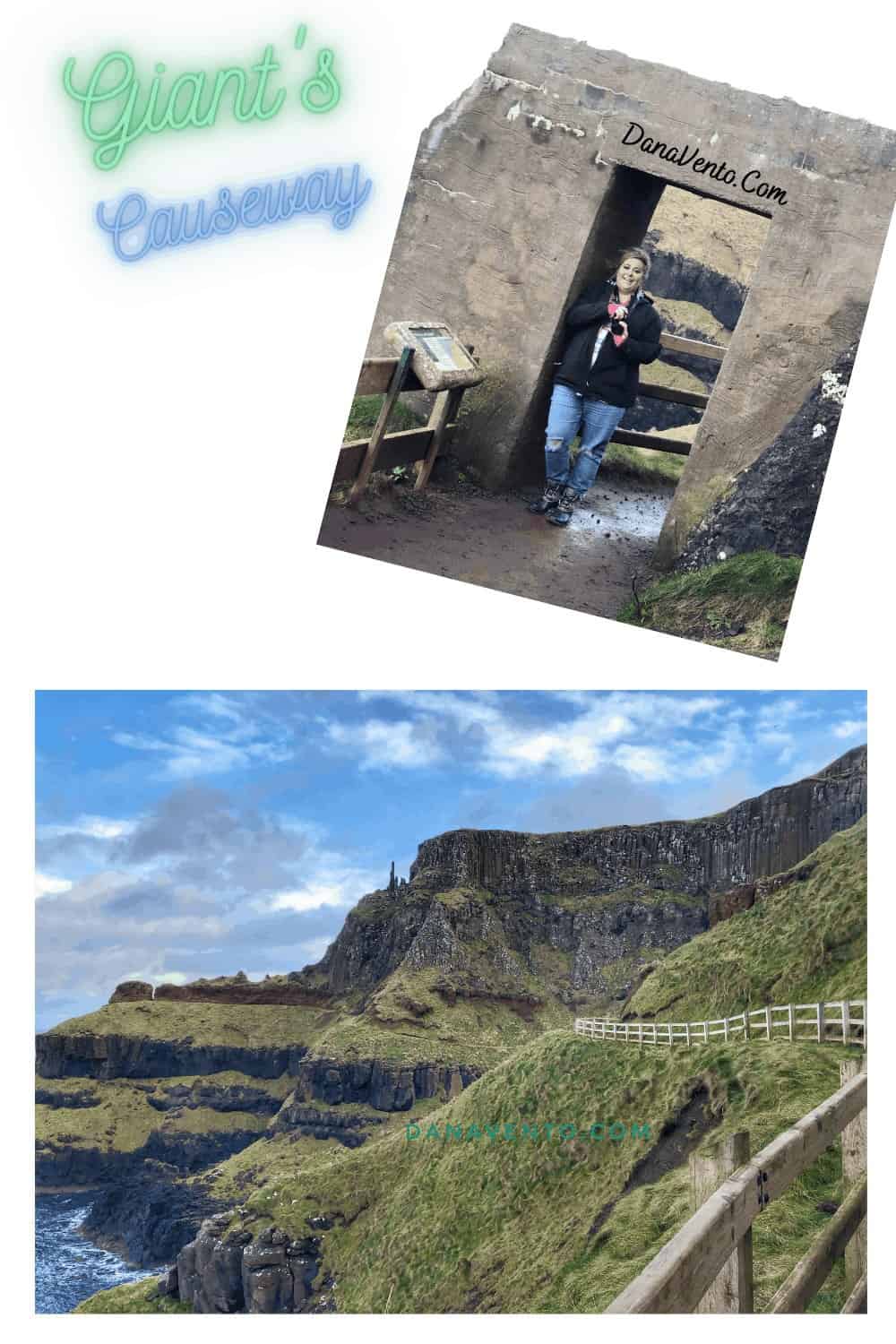 Giant’s Causeway In Ireland at the PATH CLOSED sign. I was good with just a picture!

But, Michael had to see a bit more.

Around the bend were railing and eroded walkways and a steep fall, if you continued.

And, guess what that part is where the guide rail was you can see it in the photo above. 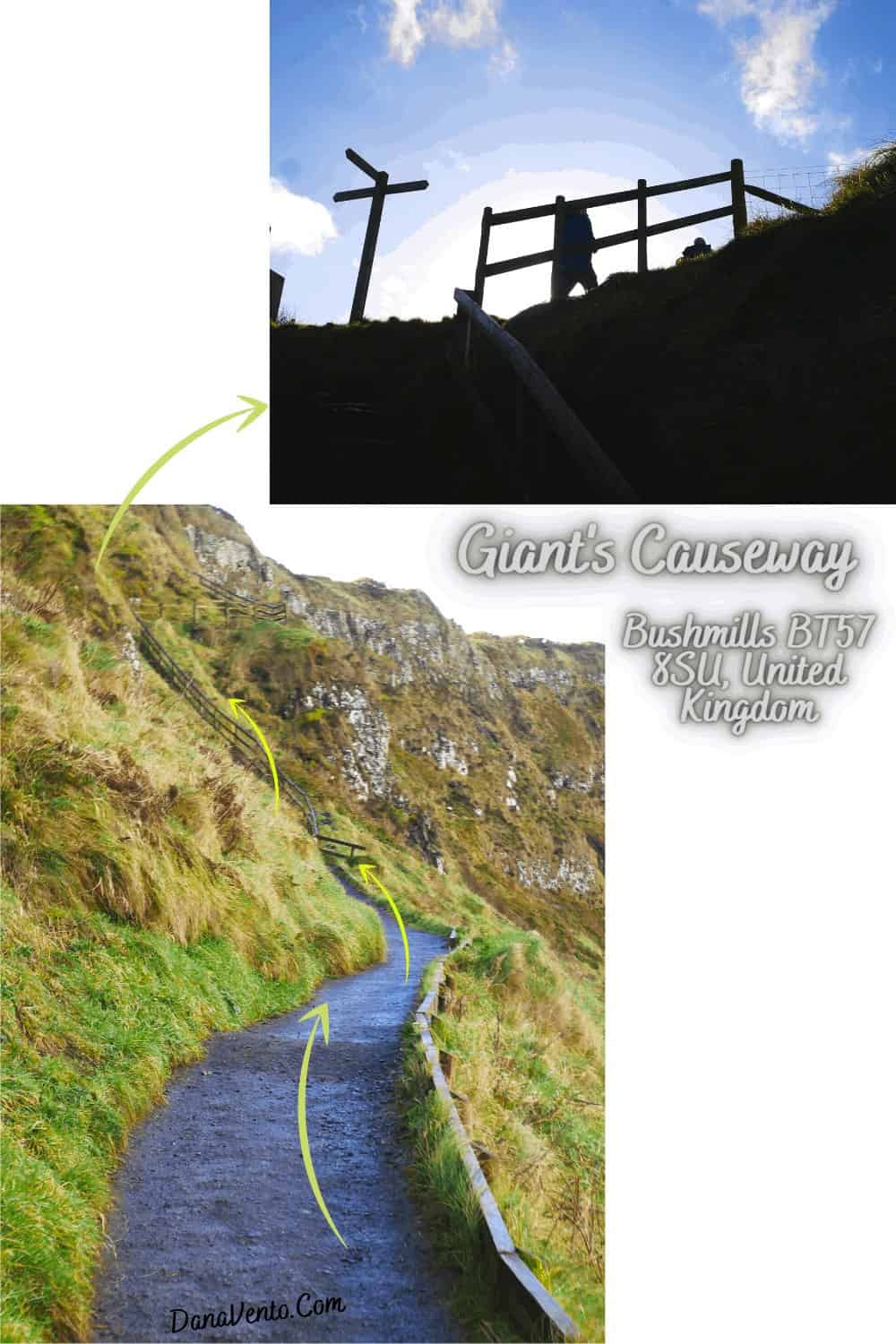 Giant’s Causeway In Ireland: Shepard’s Steps From Bottom To Steps To TOP

We turned around and headed kind of back to the basin bottom, kind of, but then decided to go UP the hill.

Hello Shepard’s Steps at the Giant’s Causeway in Ireland, “and um, please don’t let me pass out.”

These steps are very steep, and take time to get up (and I exercise daily!), indeed beasts!

Do expect, a long, steep, crawl.

I am terrified of heights, so it took me a while and a lot of ‘screaming’ to keep moving.

If you bring kids, this would be a better idea for a walk and adventure than our starting ‘cliff crawl’.

Once you get to the top, you can see for miles (if it’s nice). 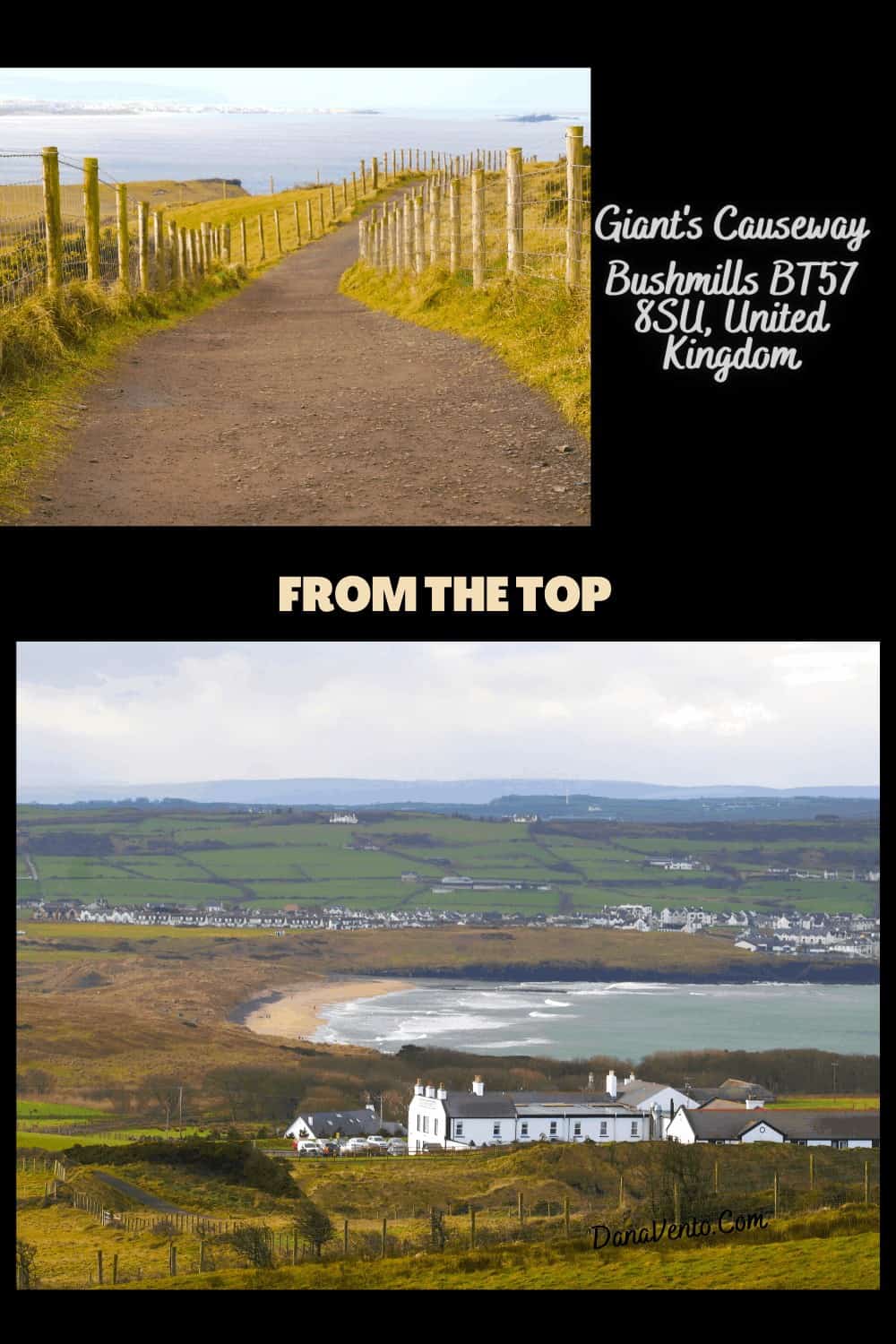 However, the wind gusts were so harsh at points, I was moved backward standing still without realizing it was going to happen.

HOT TIP >>>If you have long hair, pull it back because your roots will hurt. Remember we spent 4 hours walking here and the wind was relentless before and after the storm.

Once we arrived at the top, the sky got a bit frightening.

Add to this that the wind seriously pushed us, yes PUSHED us as we walked.

The sides of the cliffs were to our right, and we walked more inward to stay away as our guide told us before we got off the bus, “One good gust and it’s goodbye!” 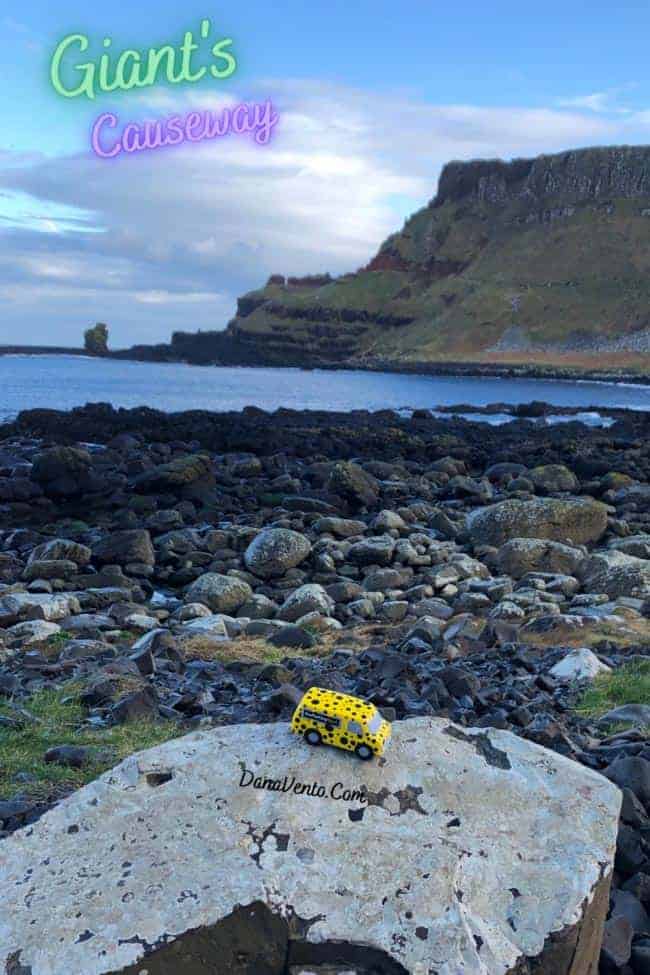 Giant’s Causeway In Ireland with paths and trails in the distance.

To hike, walk the paths, climb the stairs and ogle at nature while taking as many photos as you can, it’s all FREE!

Again, I can’t recommend this destination enough if you visit Ireland.

From start to finish, you’ll have an incredible Ireland escape when you discover the Giant’s Causeway.

Don’t forget, that this is definitely a destination to plan out and map out before you tackle! ~ Dana XO

See you at the Giant’s Causeway In Northern Ireland and I hope you use these 3 tips for the best experience! 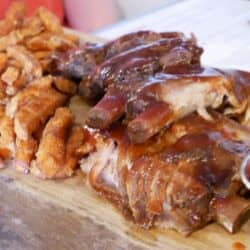 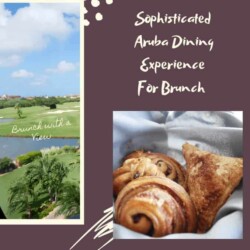 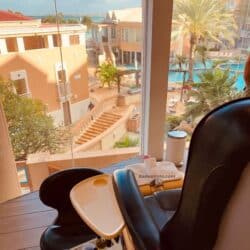 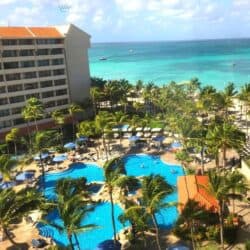 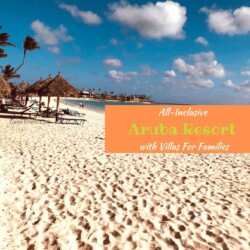