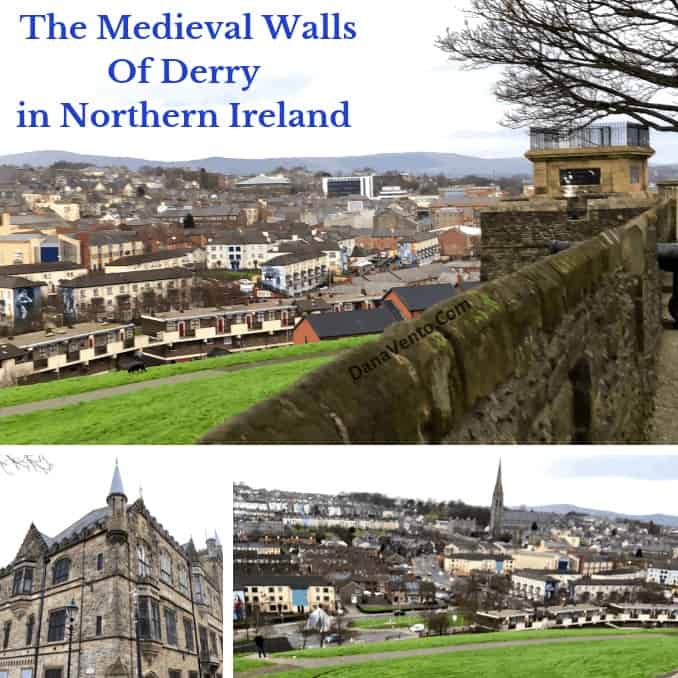 I walked on the Walls of Derry, Northern Ireland- My view

I walked on the Walls of Derry, Northern Ireland- My view

The Walls of Derry are an important place to visit in Ireland if you love history.

Much like the Cliffs of Moher, the Walls of Derry have a lot of history and are picturesque.

Believe it or not, the Walls of Derry (Londonderry) is located in Northern Ireland.

Formerly, Northern Ireland was not a place most tourists would visit, but things have changed.

I walked on the Walls of Derry: 1 Mile of powerful history & epic scenery in Northern Ireland.

How I got to Northern Ireland and The Walls of Derry.

My husband and I were guests of the CIE Adventure Irish TOUR.

Truly an immersive, experiential option to dig deep into the culture and experience a lot over 9 days.

Our tour brought us around all of Ireland, but Northern Ireland is not Ireland, it’s a separate country!!

Funky history and Northern Ireland is the UK, not the Republic of Ireland.

Confused? Oh yes, but, it’s both history and adventure you’ll find here so come along! 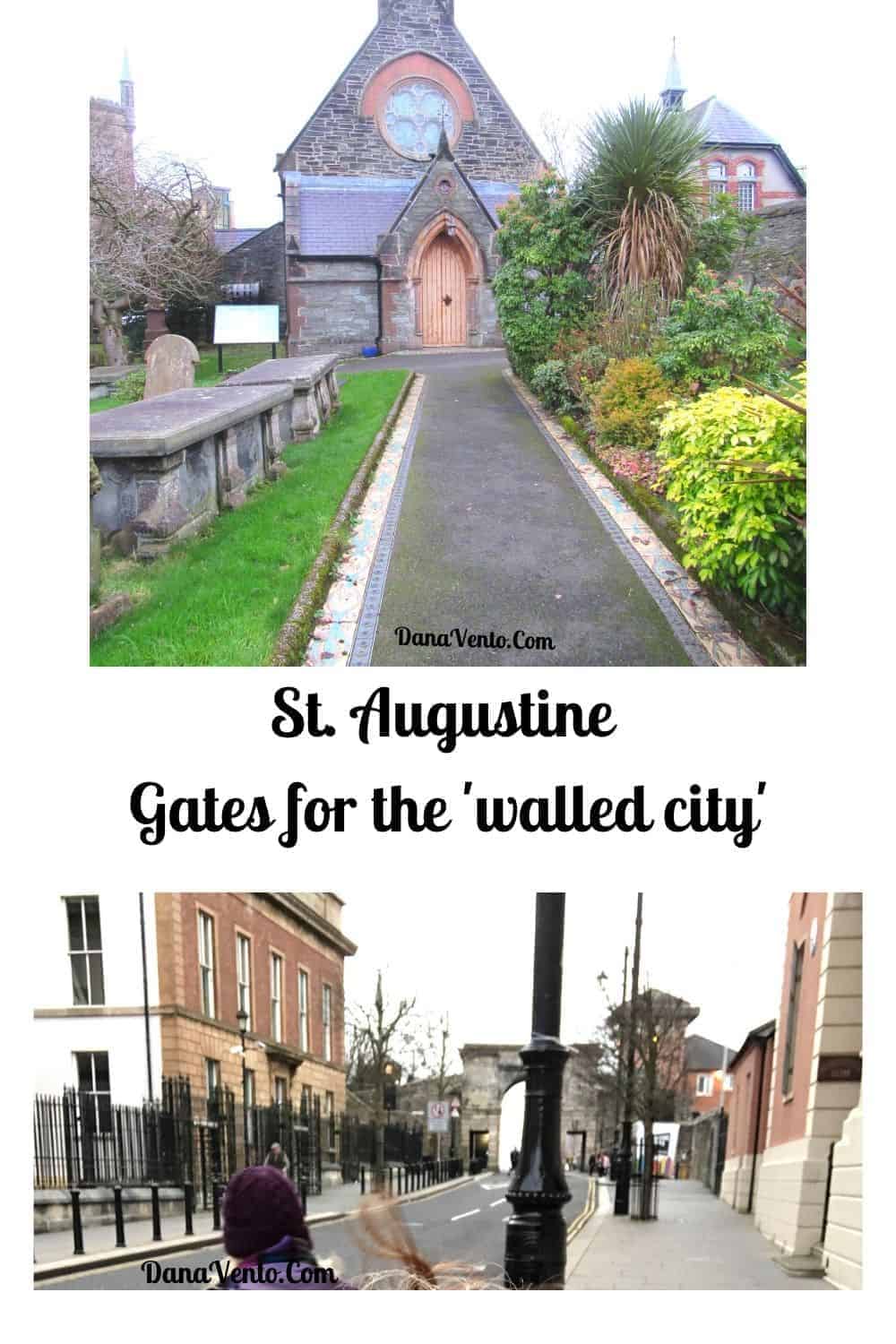 First, this is the only, completely intact walled-city, in the country.

The Walls of Derry are located in Northern Ireland, which is well, the UK.

Second, it overlooks the River Foyle.

The River Foyle was the largest port for immigration in Ireland.

I Walked On The Walls of Derry in Northern Ireland

Laugh with my headline, but it’s new, ‘have you been and did you do?’ destination.

So yes, I walked on the Walls of Derry in Northern Ireland and that makes this a special adventure.

Historic walls were created in 1613 and now a lovely town with lively pubs awaits your visit.

Here, you’ll be treated to ‘Million dollar views of the renaissance-Esque streetscapes’ that span over a mile along the walls.

Before The Walls of Derry: The River Foyle 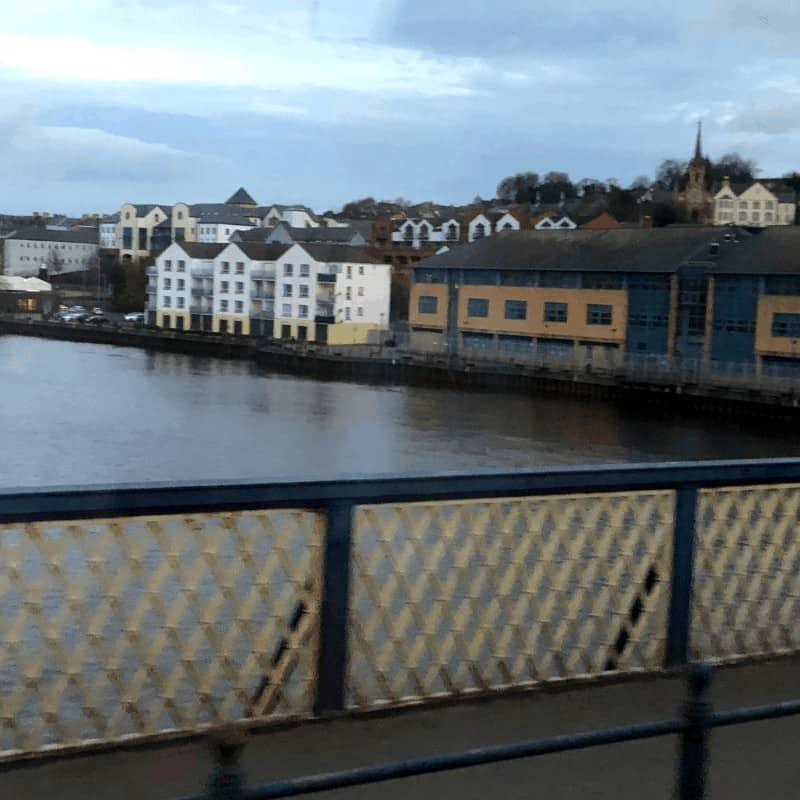 Derry itself is situated on the River Foyle as shown above.

Tidbits About The Walls Of Derry and The Area

Derry and Londonderry can be used interchangeably, and both are proper ways to reference.

Those that live there, refer to the area as Derry.

Visitors may refer to it as either.

What To Know About The Walls Of Derry in Northern Ireland

What we were about to experience is considered: the best ‘Walled City in Europe.’

In fact, the wall encompasses over a walkable mile, of the inner city of Derry.

Walking on the wall provides stellar views of the previously referred to renaissance-esque like city.

At points the wall is 12 feet and others 35 ft tall, depending on where you are.

The ‘peep’ holes in the wall provide a very different perspective, for shooting photos. 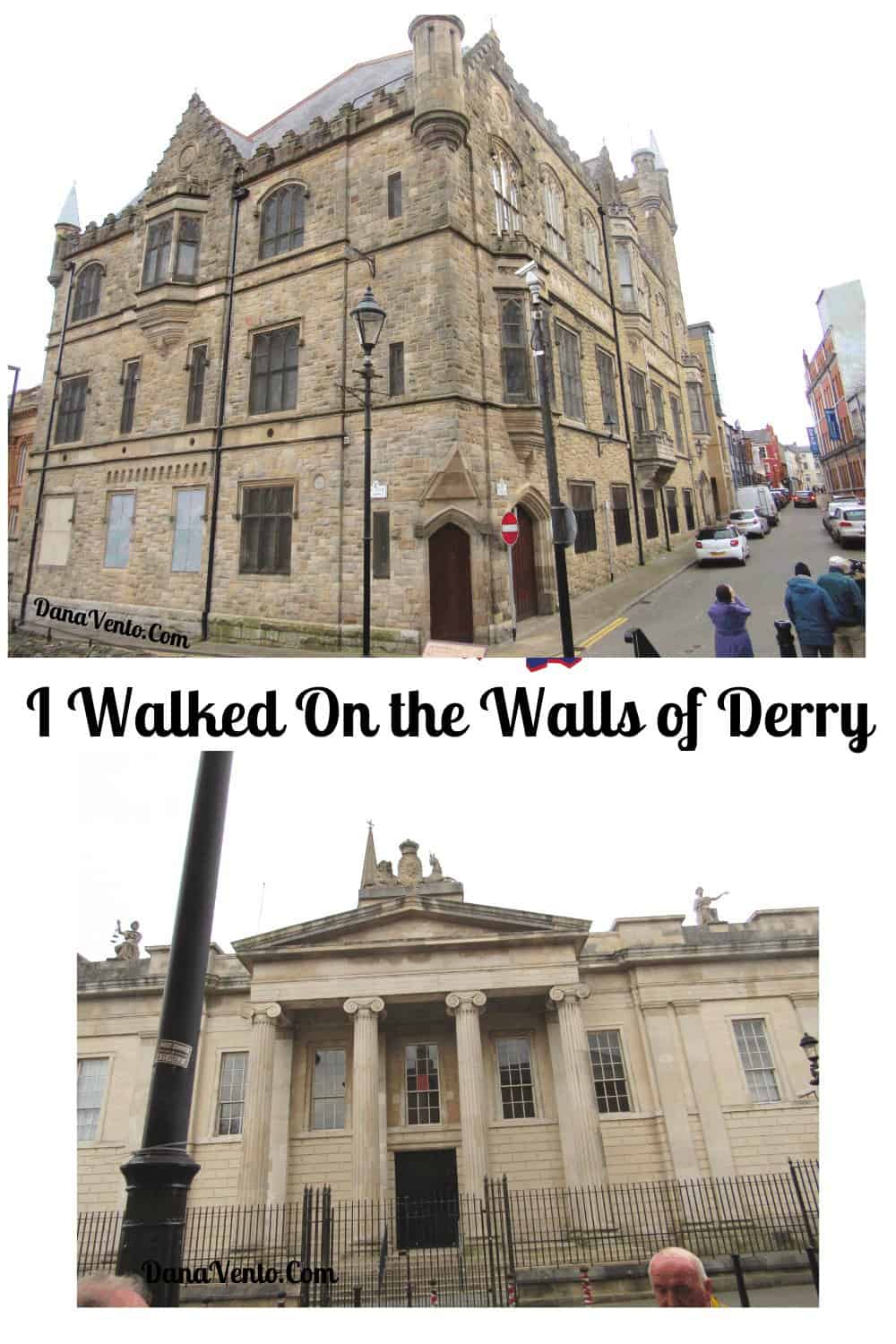 When we pulled up with the tour bus, we parked in an iconic spot.

Eerie, and defiant of days past.

Why was it eerie? 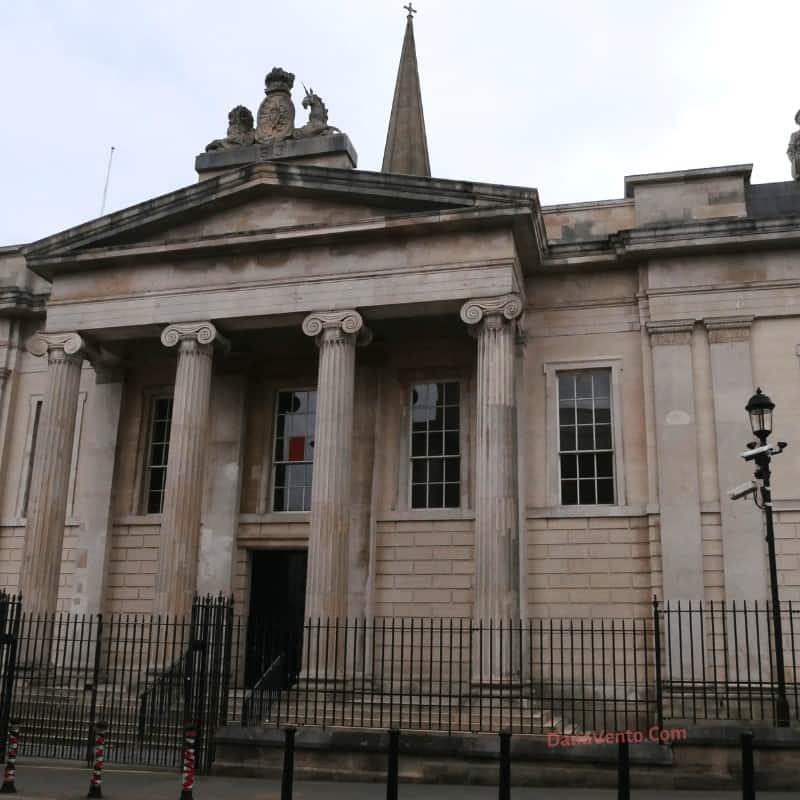 There was no one around (albeit a late afternoon on a Saturday), but more because the government building had been BOMBED 45x over the years.

While it is a destination you don’t want to miss I felt somber learning more about this truly sad piece of history.

Walls of Derry: Seek Out The Bishops Gate 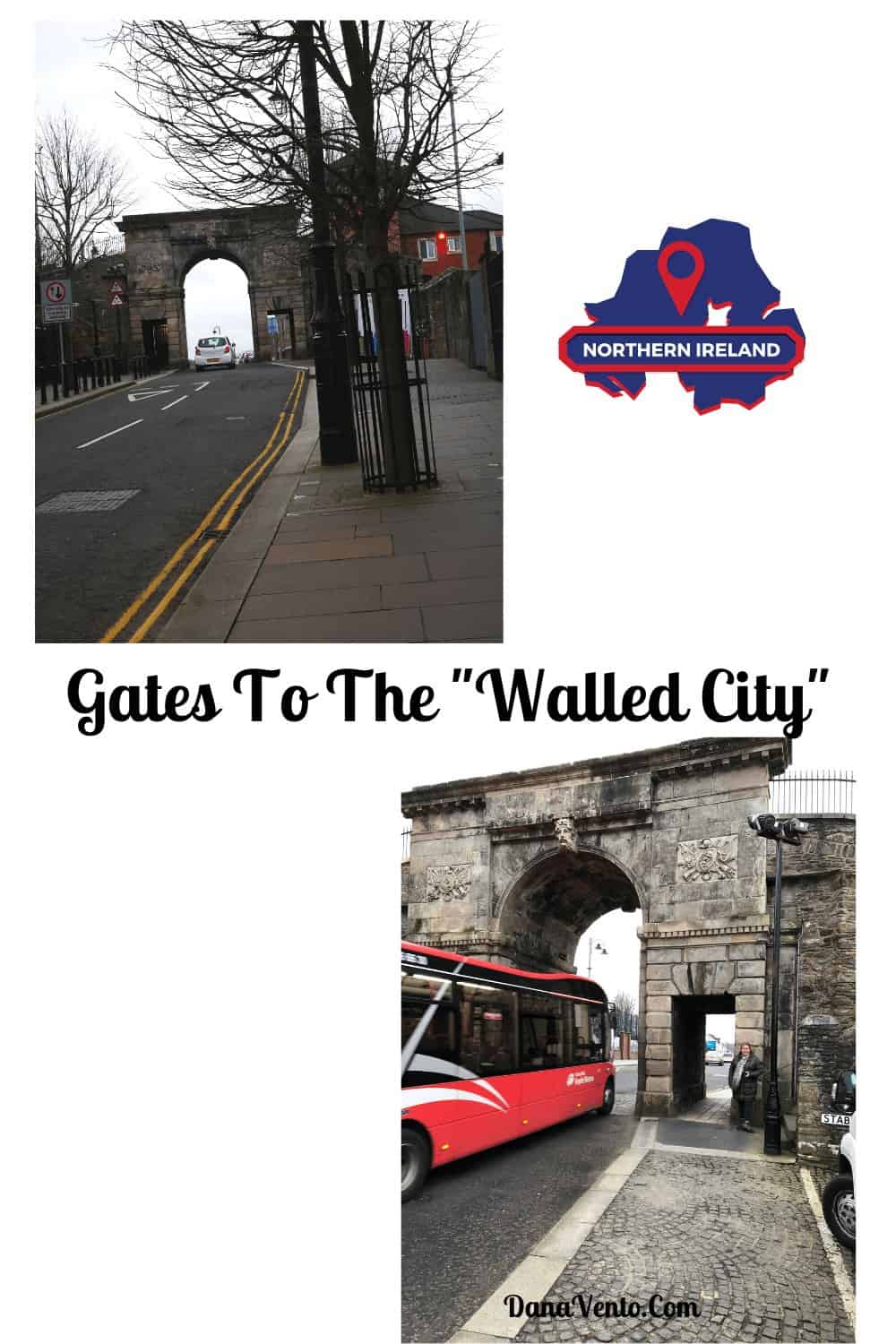 Gates To The Walled City Walls of Derry

Before heading to the walls, our local walking guide met us aboard the bus.

There he set the stage for the landscape we were about to be ambient upon. 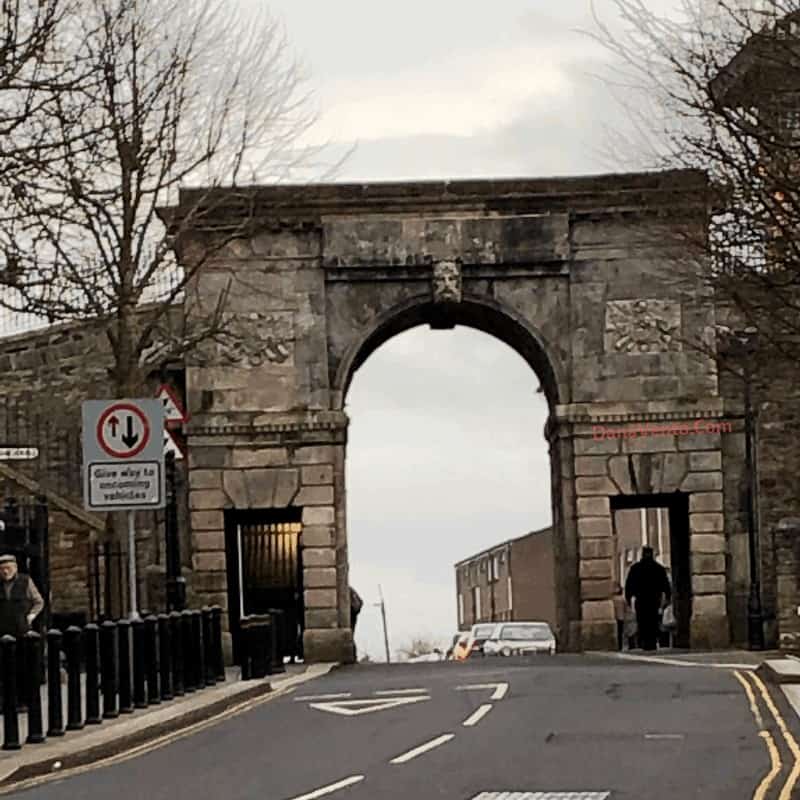 The ‘walled city’ is situated within these gates, 4 are the original while 3 others were added later for a total of 7.

Bishop’s Gate and 3 others: Ferryquay, Shipquay, and Butcher’s Gate are also each on the main streets.

All gates lead you out of the centrally preserved area, protected by the wall.

I Walked On The Walls of Derry 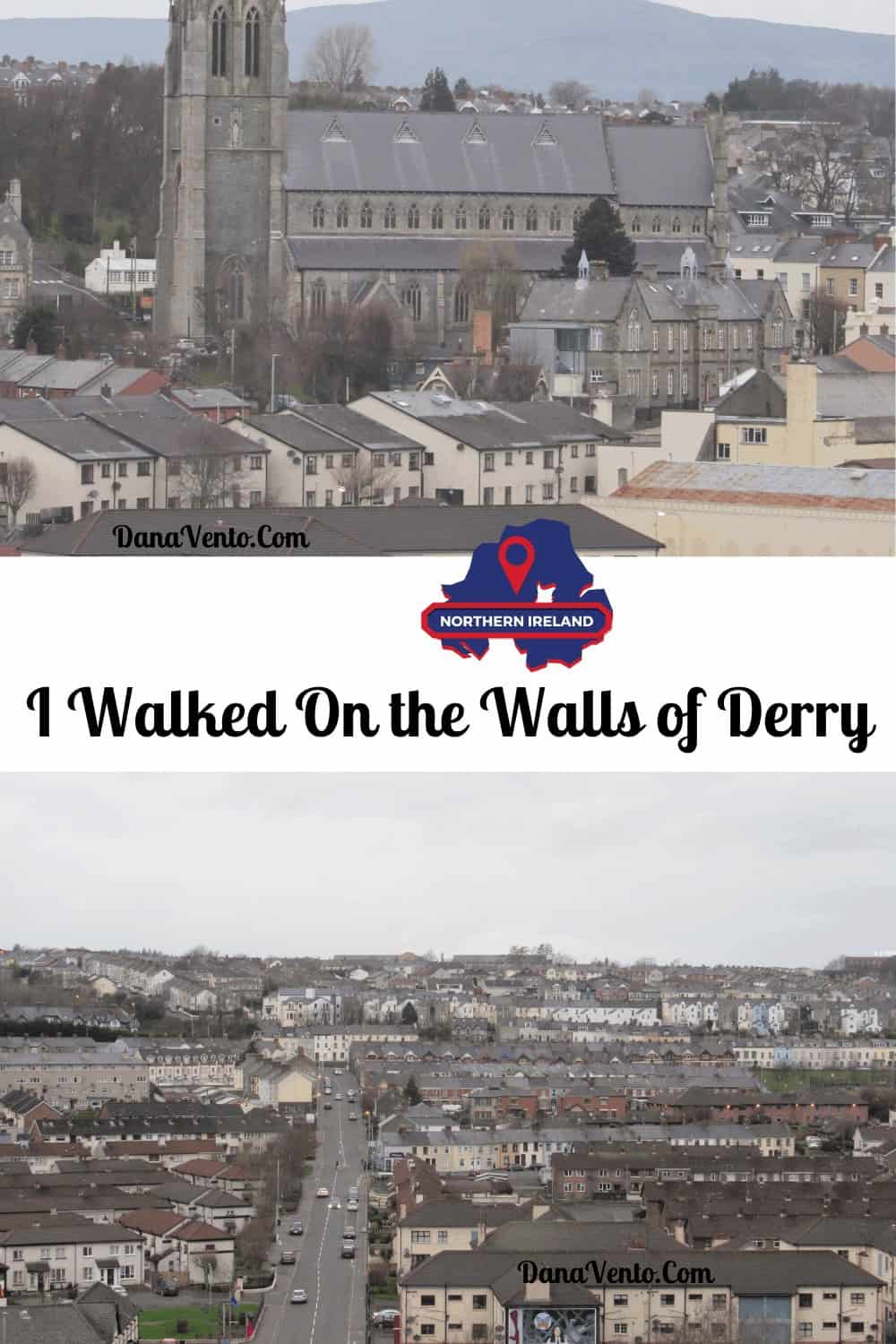 My walk was on the rampart top walk.

Behold what my eyes were about to see.

A view that extended beyond my wildest dreams as you can see the developed city. 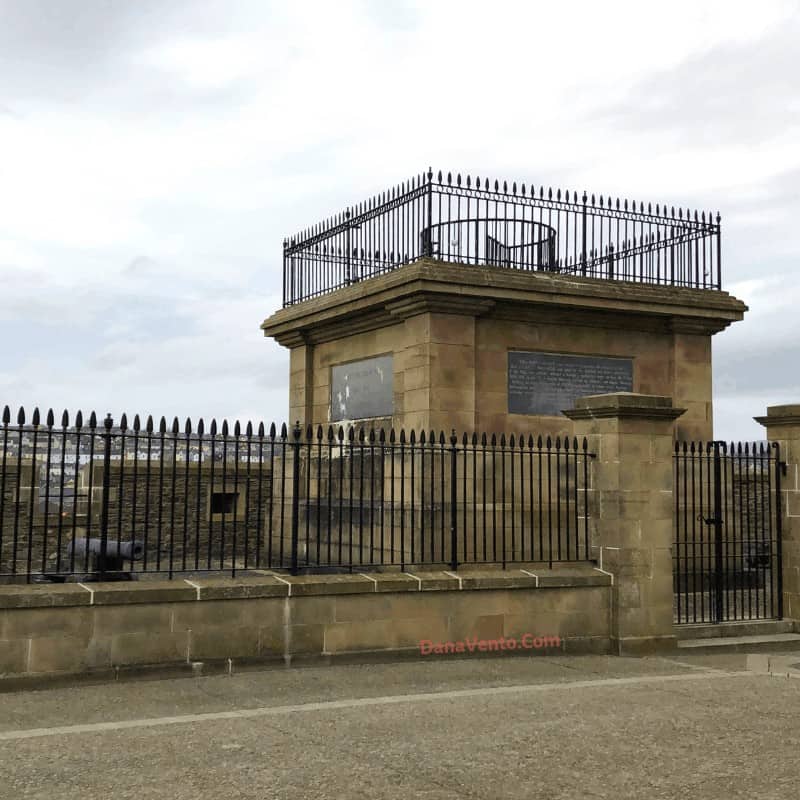 Rampart Top Walk of the Walls of Derry in Northern Ireland

The Walls of Derry Feel Very Different From Cobh.

While I can’t say that this adventure has the same whimsical feel as visiting Cobh, I can say that the tales here are gruesome.

The people in Northern Ireland have battled for their freedom through the Civil Rights movements.

Rather than consider the bad, I looked at the beauty and understood the history that brought it all about.

You can’t help but really be attracted to the cityscape, it reminded me a little of home.

The houses stacked one after the other, like the Southside in Pittsburgh, Pennsylvania.

From The Walls of Derry To The People’s Gallery

The Derry Walls are only part of what needs to be seen here.

The Bogside area of Derry heavily features art that tells the story of the struggle for independence.

Do you see the painted mural of Annette McGavigan?

She was only 14 and she was killed by a British soldier.

Annett was simply standing on the street where she resided.

The image is known as ‘Death of Innocence.’ 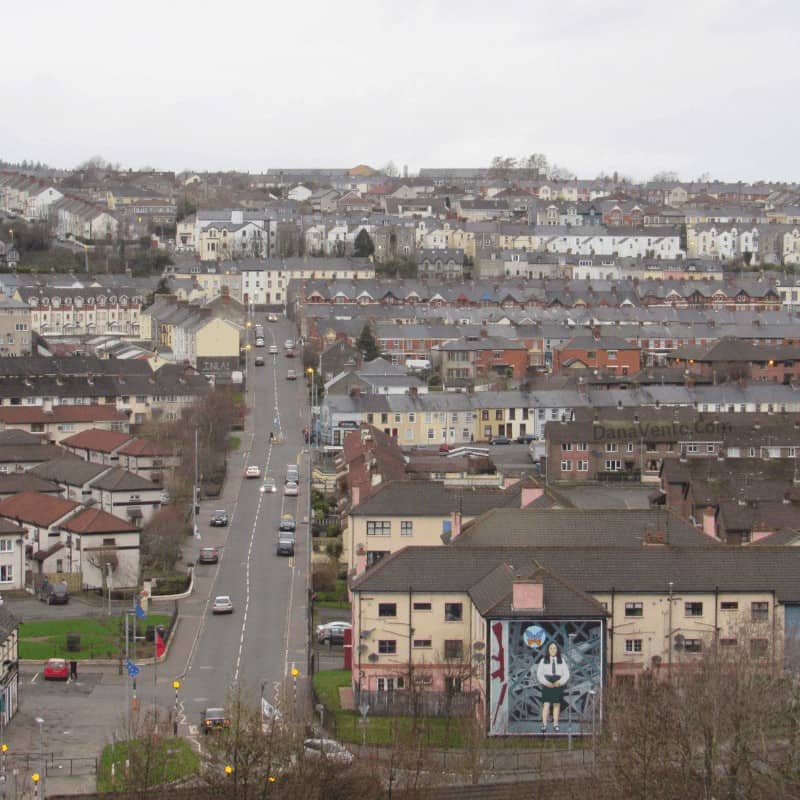 What I can share with you is the additional imagery we took while ON the bus.

We stopped briefly along the roadside as we were winding our way up to the Derry Walls to walk, but I feel compelled to share this with you.

To understand a country, a culture, a city, a place, you need to look at it from the inside.

Learning about Ireland first hand, from the area, and through the People’s Gallery (a.k.a. Bogside Murals) depict something so different than we were taught in school. 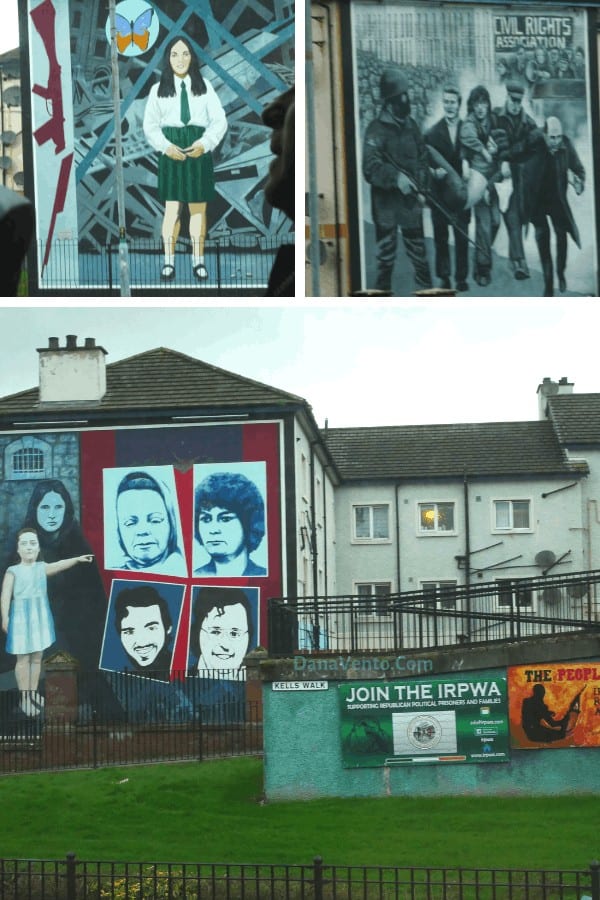 The Walls of Derry & A Few Canons

Was I really looking at a cannon?

There are several along the wall, unfortunately, we had a lot of territories to cover and we were losing daylight, so onward. 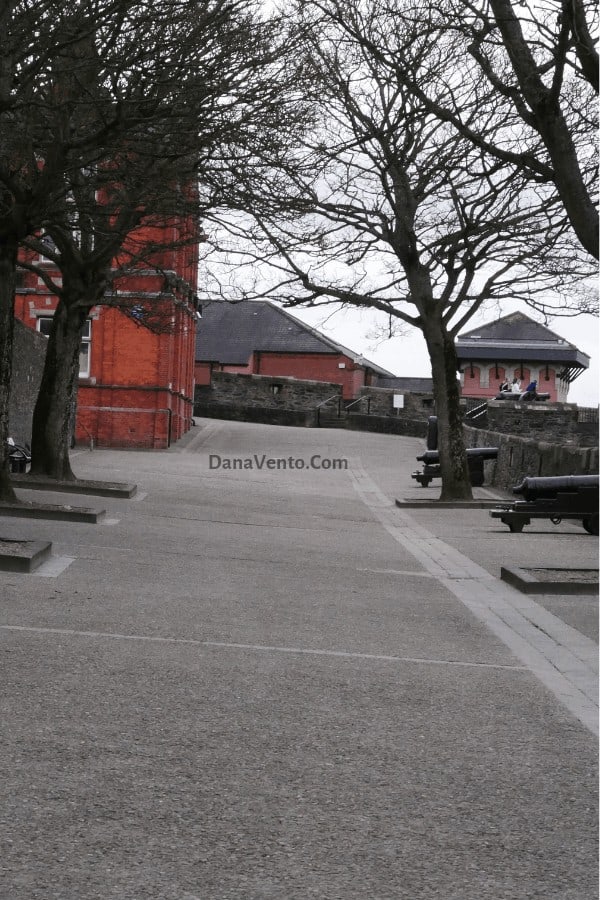 Cannons atop the Walls of Derry

While we only sauntered on a piece of the long one-mile wall, I loved what we saw.

There’s more to uncover here, but today this was a great introduction to the history of Derry.

So picturesque, I lost myself in the scenery more often than I kept up with the tour! 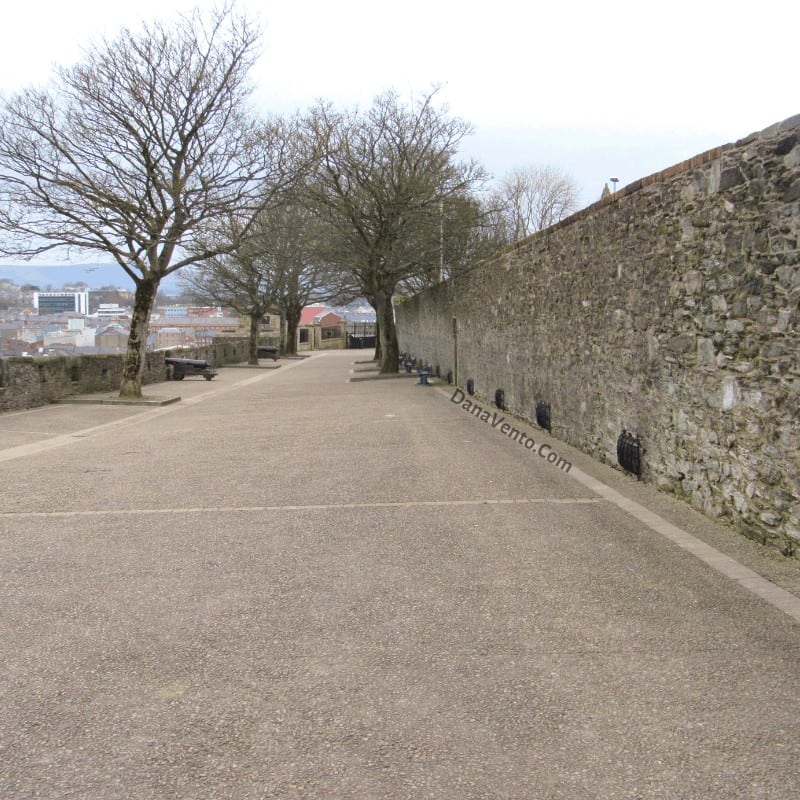 Walls of Derry with Cannons and trees and the city

St. Augustine’s Church & On the Walk via The Walls of Derry

There’s nothing like a church amidst a lovely walkway and this one rich in history.

However, when dusk touches it, with the lighting, your camera will beckon you to snap away.

I did just that because dusk-kissed elegance appears. 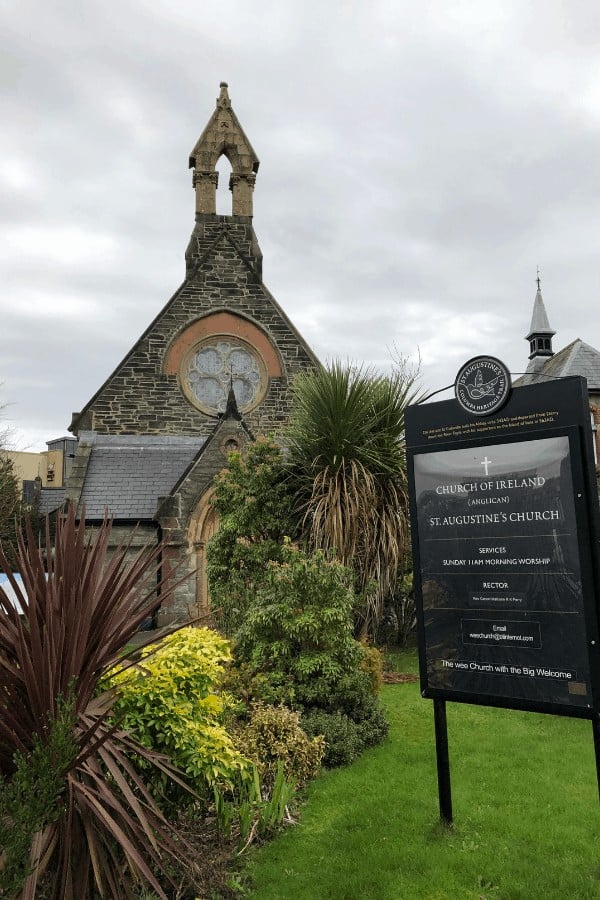 St. Augustine Church along the walls of Derry

Before Exiting Our Walls of Derry Tour…

Around the corner, was the alleyway that I loved.

Perhaps one of my favorite photos of the trip, as it is simple and pretty.

As a traveling gal, I love alleyways and the imagery they offer, and this was exceptional.

Often I consider a beautiful alley a stolen moment that I get to enjoy.

Untouched, pristine, and ready to be shared with the world, and after the photo, it is just that, an alley that other pass. 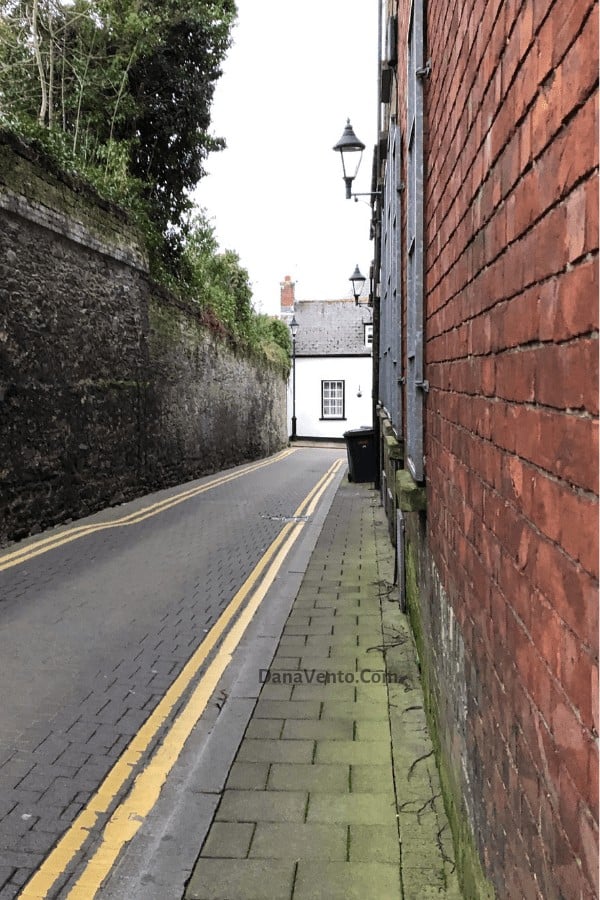 A simple Ireland after walking away from the Walls of Derry

To experience Northern Ireland the way I did, walking, watching, hearing. learning was a memorable time.

Understanding that textbooks are great but real life is best, is an understatement.

My appreciation for the plight of those involved through the years of tireless struggle was increased.

Make sure to visit Northern Ireland and the Walls of Derry: 1 mile of powerful history and epic scenery ~ DANA XO