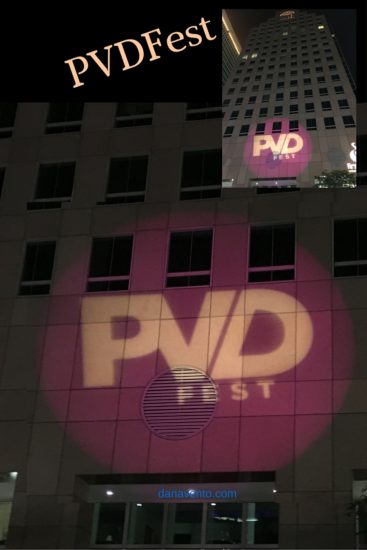 Once upon a time, in a state not so far away from Pennsylvania was a trendy state named Rhode Island.  In Rhode Island, a behemoth of culture, art, music, dance, food and fun were just waiting to be displayed in a city named Providence.

A Mayor stepped up to the story board of the city, challenging it to spotlight itself.  The Mayor has made the decision to showcase what the city does so well creating a festival for the eyes and the mouth, dubbing the festival PVDFest Providence.

In a city overflowing with stylists, designers, artists, musicians and those making profound strides in the world, such as Barnaby Evans, it was just time to showcase what the city already has so much of.  Who is the person behind the PVDFest Providence?

How could a city celebrate itself and share it with others providing a spotlight not just on big names, but on those just evolving, those attending RISD, Brown University and a plethora of other schools for the arts?

Lavishly live the arts out loud, and travel with me for a quick overview of the PVDFest Providence.

Mayor Jorge Elorza began his term as Mayor on January 5, 2015,  and since then has made incredibly swift strides to provide a most ambitious platform initiative: to celebrate the cities most talented.  How does one celebrate talent of the arts, and foods? The answer is quite simple, however quite complex in planning: PVDFest.

Mayor Jorge Elorza knows the value of his city, and how creatively rich in art, and culture the Providence area truly is.  The Mayor has a south by southwest long term vision of how art should be displayed and appreciated and hisPVDFest has tackled the quest vividly and head on..

I simply could not help myself in making a comparison to the well known Pitbull (Mr. WorldWide) as my first sighting of Mayor Elorza was dancing in the street, shaking his tambourine and feeling the high-paced vibe of celebration. 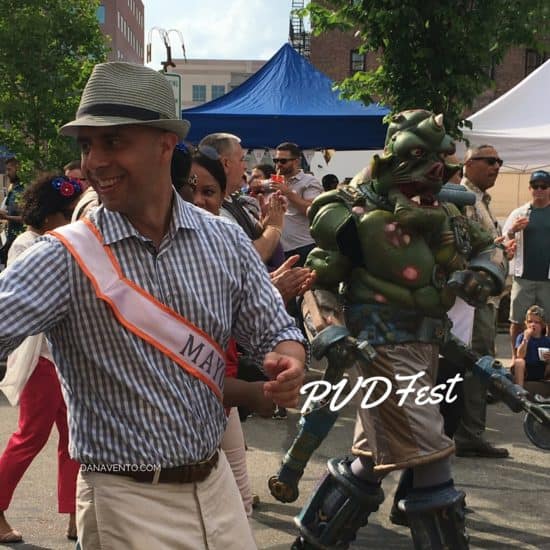 Leading the opening parade, walking through the city blocks, shaking hands, and really being the center of the weekend party, there are just simply no other words to describe him, and from his hat to his knowledge of his city, he is incredibly talented all on his own;  add the city to the mix and they are the rock-stars of art.

No disrespect meant here, when I compare Jorge Elorza to Pitbull.  There is just so many wonderfully fun sides to a very serious former American Law Professor who has transformed his city into what is was without ever having worn its badge before, never really owning it! He is hands-on, in it, in making sure that the city celebrates itself, and he does not do this from behind a desk, rather as part of the people, cause he is that cool.

When I first met Mayor Elorza, of course I told him that his essence and celebration of life and that he reminded me of the superstar Pitbull and in fact, Mayor Elorza is a superstar. He smiled, because he wants his city celebrated for what they already are, it is just time to pay that respect to the culture.

What Mayor Elorza has done is take what is already there, the murals, the arts, the talent and brought it to the forefront to allow the city to OWN the arts that it has so wonderfully channeled and produced throughout time.  Want an example? How about Barnaby Evans, creative director, producer, artist, world renowned photographer, graduate of BROWN University and creator of WaterFire.

Yep, this just happened, a chance meeting with Barnaby Evans.  I was leaving the Providence Biltmore from a private reception on the rooftop with Mayor Elorza, and I just so happened to eye-spy Barnaby Evans, and well you can see the rest is history! 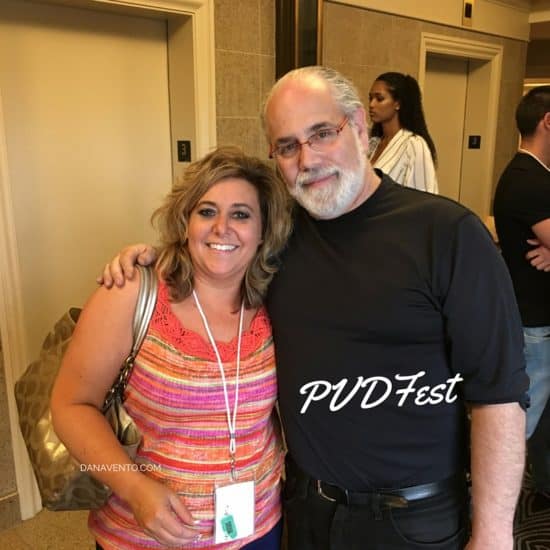 It Takes A Village To Create The PVDFest

It was as if talented people were just falling from the sky, and into my presence as I met Yarrow Thorne, the founder of Providence organization, The Avenue Concept.  Yarrow is on the right hand side of this photo ( and Christina too) and the photo you see features The Close Act Theater starring, White Wing & Saurus ready to do the Influx Walk, as they will chariot us on a walking tour from art work to art work. 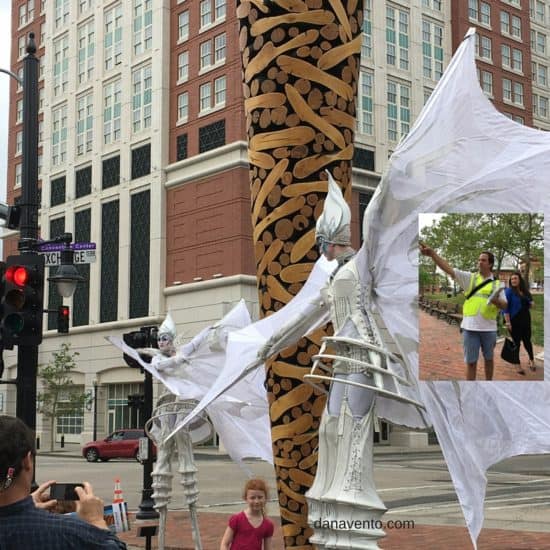 Yarrow provides installation of art throughout the city, that will allow the city to capitalize on its rich, wealth of diverse talents, showcasing it while blending it into the streets, alleys, parking lots, etc.

Streets that have graffiti have it purposefully because Yarrow’s vision of art is that ‘graffiti can be well-placed art’ and you will see Graffiti and murals throughout, and it just blends into the background, take a look, as I went seeking The Photo for you:) 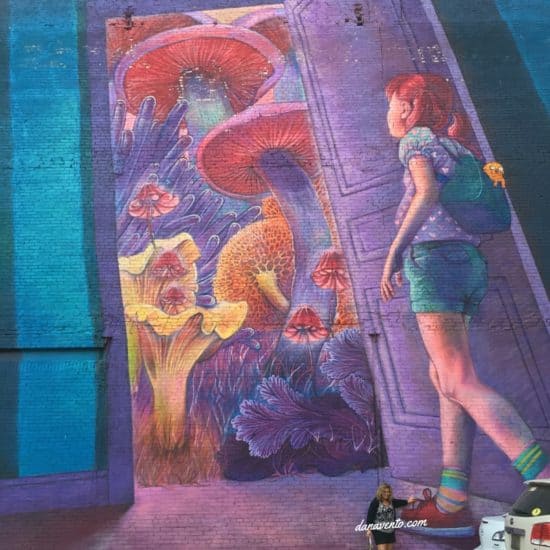 Yarrow supports the Mayor’s vision, knowing that Providence is the city of arts, just not celebrated as such and they are this kick-ass team changing the way you will see art. 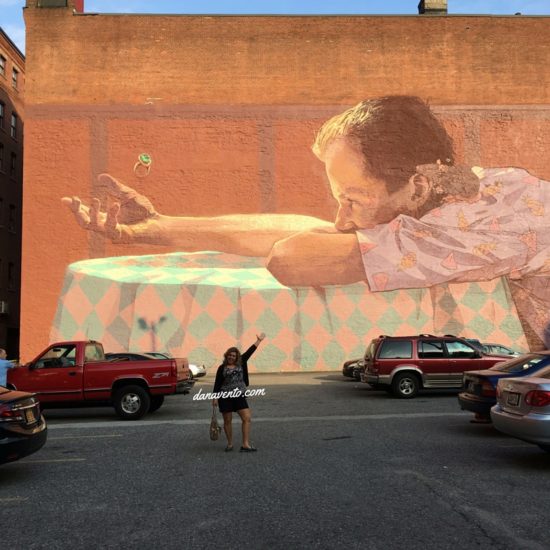 The streets were alive with fun, people, music, dance, displays, art, and the awesome, life-size murals that are displayed throughout many of the streets and parking lots, adding life to lifeless areas. 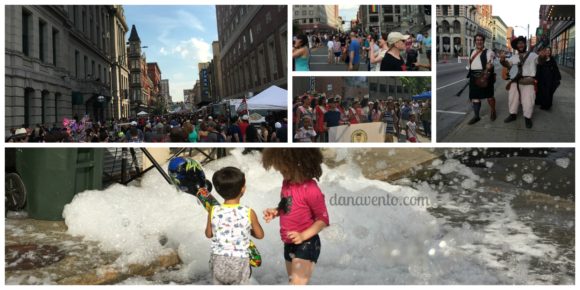 From morning till night, beginning Friday night with the Influx Walk through Saturday night when the parties took to the streets, and music made it incredible, there was a non-stop celebration.  While the crowds were there, it did not interfere with time well spent, because while you were elbow to elbow in some places, you were completely alone in  your journey to enjoy talent showcased unlike any other.

My personal thanks to the CVB of Providence, The Mayor, Barnaby Evans, Yarrow Thorne and all those who invited me to be their guest in a city that deserves the spotlight! The pleasure was all mine and I will see you again! Lavishly live life out loud and indulge in art through the PVDFest Providence. I experienced the Best Of Providence as a member of the media.  While the trip was hosted by Go Providence my stories, opinions and images are my way of communicating honestly how I feel about a destination.