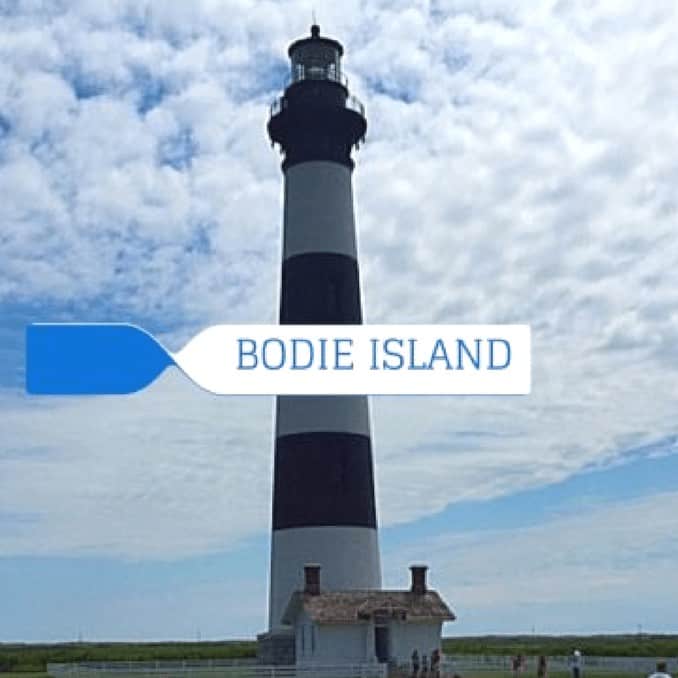 Even with all of the traveling, I have done as a child, and an adult, I have never seen a lighthouse up close and personal.  Visiting a lighthouse ranked high on my summer bucket list and this year I managed to visit 3, one being the tallest and one being the oldest, in the United States so that is all pretty cool.

The Outer Banks offered me the chance to eliminate visiting a lighthouse and climbing a lighthouse off my summer bucket lists and I got to see some pretty unique structures while gaining a bit of education.  While the Ocracoke Island Lighthouse was the one you could not enter, it still was awesome to see.

Tips of The Bodie Island Lighthouse

We were down in Hatteras Island, so we had already passed the Bodie Island Lighthouse on the way in, but we knew we would pass it on the way back to Virginia, so we stopped on our way.  The Bodie Island Lighthouse is easy to access as it is right on Highway 12.  Getting into the lighthouse is an easy turn in and getting out it’s just as easy. You will find plenty of parking lots and many families touring this destination. 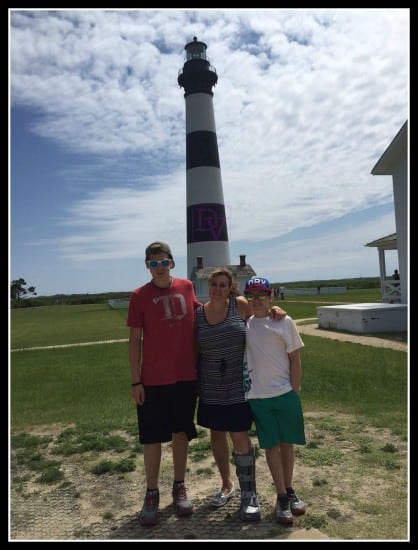 Now you might say once you’ve seen one lighthouse you seen the mall, but each lighthouse has a very different story.  We learned a little bit of history about this lighthouse as we spoke with some of the locals, however, the story is a little bit different. The story the locals in the OBX provide claims that the lighthouse was named after all of the bodies of all of the dead sailors it would actually wash up to the land after being shipwrecked.

You see this area is known as the Graveyard Of The Atlantic, where the water is a little bit rougher and there have been over 600+ shipwrecks. You can see many of the shipwrecks in the Graveyard Museum while you are in the Outer Banks.

The locals told us that bodies would wash up on shore and pretty much deliver to the lighthouse area, and then the name Bodie was created.  The fact is this is the 3rd Bodie Island Lighthouse, that’s right number three, as each of the previous met their structure fall.

12 Facts About The Bodie Island Lighthouse 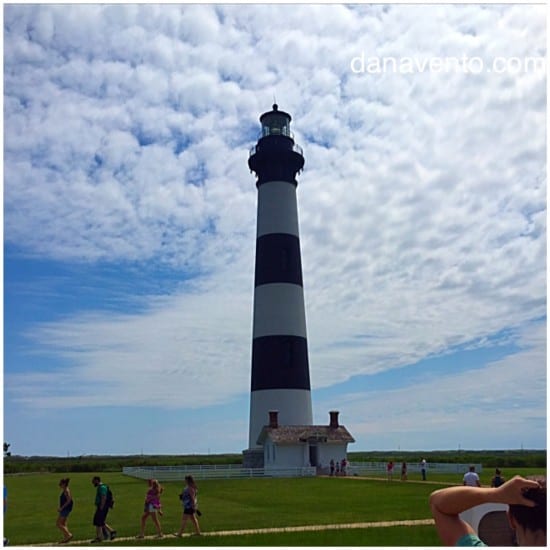 1)   The first lighthouse was built structurally incorrect and ended up leaning, that was in about 1847 or so, and then it just ceased to exist.  The location of the first lighthouse was in Pea Island(you can see our adventure there on a different post).  There was another Bodie Island Lighthouse build to replace the first close-by however it fell victim to the Civil War.  The third was built in 1872 and remains and in fact, was just refinished a few years ago.  Yes, you can tour it and it is so breathe-taking. You pay a fee to tour, or if you just want to walk the grounds there is no fee.

Now the true tale is that the land was purchased from the Bodie Family and the name Bodie Island Lighthouse was then created, however, there is a different spelling as you will see if you tour and go to the lighthouse.  My preference is the folklore/local tale, not for the sad parts but because it gives it a bit more of an eerie appreciation to the lighthouse itself.

2)  The Bodie Island Lighthouse was restored a few years back and at that point, they made it possible for you to enter, gain entrance to the lighthouse and actually tour it for a set fee. The lighthouse is not open 24 hours a day you must follow the visitor hours in order to gain access.

3) The Bodie Island Lighthouse is in the marshes of the Oregon Inlet, the surroundings are very last and very green. I also highly suggest using some DEET before you go visiting as you are in the woods and the bugs Do bite.

5) The cost of the land for the Bodie Lighthouse was only $150 and this was in 1846, I simply can’t wrap my head around the cost, crazy right?

6)  Yes the lights on the lighthouse function nightly to keep those dark waters, that have been so treacherous before, lit just enough, quite the site to see! The light flashes every 30 seconds and is relied upon by many.

8)  The same rules apply for climbing this lighthouse meaning that if your child is not at least a 42 inches high they are not going up and in. Heat can be a factor in climbing in causing people to pass out so you want to bare that in mind when you visit this particular lighthouse. Remember to wear basic shoes such as tennis shoes not by heels. The weather does actually cause the lighthouse to open and close, so look at the weather before you head out. Weather can change rapidly when you are on the coast (we know:)

9) There is no air conditioning, only the natural breeze and you are not going to find an elevator this is something that you have to physically climb, no getting to the top without a little effort. In addition, you will find restrooms as well as a gift shop.

10) As like the other lighthouse(Cape Hatteras), The Bodie Lighthouse has about 200 steps from top to bottom, and the stairs are narrow with very thin rails. If you have a fear of heights this may not be the climb for you. You will find nine landings in this lighthouse to stop on just like in the Cape Hatteras Lighthouse(there were 8 landings there stopping at every 31 steps).

11) You pay eight dollars for adults, and four dollars for children. This will gain your entryway into the lighthouse. You can also just walk around the outside if you want without a fee.  Trust me, the photos you will take are perfect for any holiday card(lol)

12) The day we were here and the time did not allow us to gain entrance as there was a line and we did not have time. If you make it to the top and can stand the heights and the stairs you will be rewarded with a spectacular view of the Oregon Inlet, The Bonner Bridge, The Atlantic Ocean and of course the surrounding marshes.  Nature at its best and a view that can not be challenged by anything as you have a bird’s eye view!

It’s time to travel, create a bucket list and get out there to see the lighthouses in the Outer Banks.  If you are ready for a true adventure, climb to the top, walk the grounds and learn all the history, then you will be Adventure. Eat. DIY. Repeat. and enjoying an adventure at the Bodie Island Lighthouse in Nags Head, North Carolina.