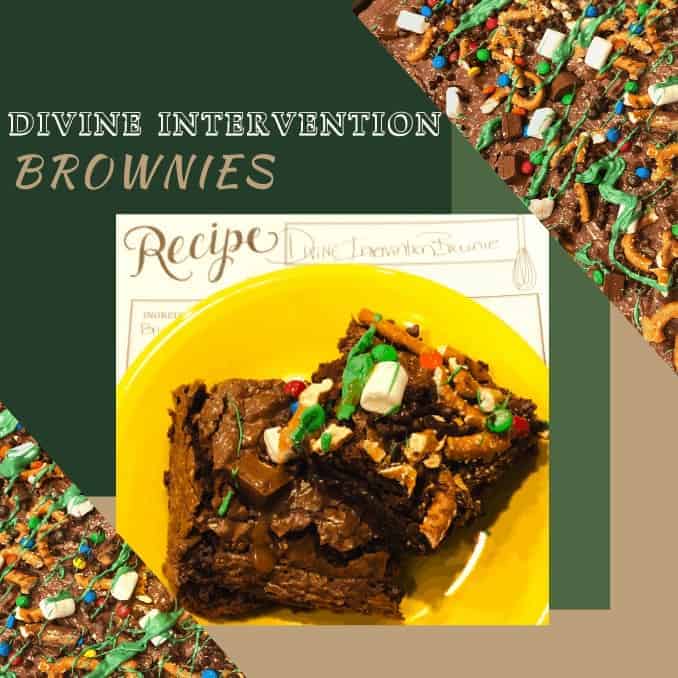 These brownies are the most amazing brownies you will eat.

You’ll savor a range of tastes from sweet to salty, chocolatey to fudgy.

Bake them for Mother’s Day, Father’s Day, Parties, Holidays, or any time you just need a sweet & salty chocolatey treat!

Fudgy sweet & salty brownies are referred to as Divine Intervention Brownies and I’ll share why.

Everything has a story right?

Truly, fudgy sweet & Salty brownies are the ultimate in craveable desserts or that ‘snack’ you need after a terrible day!

After all, we’ve all had one of ‘those days, where nothing but sweet, salty, and chocolate can help!

Now let’s add the Nom, Nom, Nom into each bite, shall we?

For now, gather a baking tray and get ready to experience a masterfully executed untraditional tray of brownies.

While you read and I chat, please note that DanaVento.Com has affiliate partnerships so we may receive compensation for some links to products and services.

Brownies are understated bites of bliss, yet, the joyful jumble of the brownies I am about to share is unmistakably stated.

Generally speaking, (as so as not to use an ALL or EVERY) you won’t be able to resist the flavor combinations, no matter what your bite of brownie has embedded in it.

Which is where the story starts.

When You Have A Brownie Junkie, Shake them Down. LOL

One of my sons is a brownie junkie. Fudgy Sweet & Salty Brownies will be a conversation starter to say the least!

I can tell you if there is a pan of brownies it will quickly be reduced to a plate of brownies!

With a mother’s intuition and a few sibling subtle hints, I knew something was going on under the radar in his life.

Of course, no one wanted to discuss it or be known as the ‘rat’ that spilled it in our house so, I was the clever mom.

When you need to coax a little info out of someone who loves chocolate, these are those divine intervention sections that lead the way to conversation. 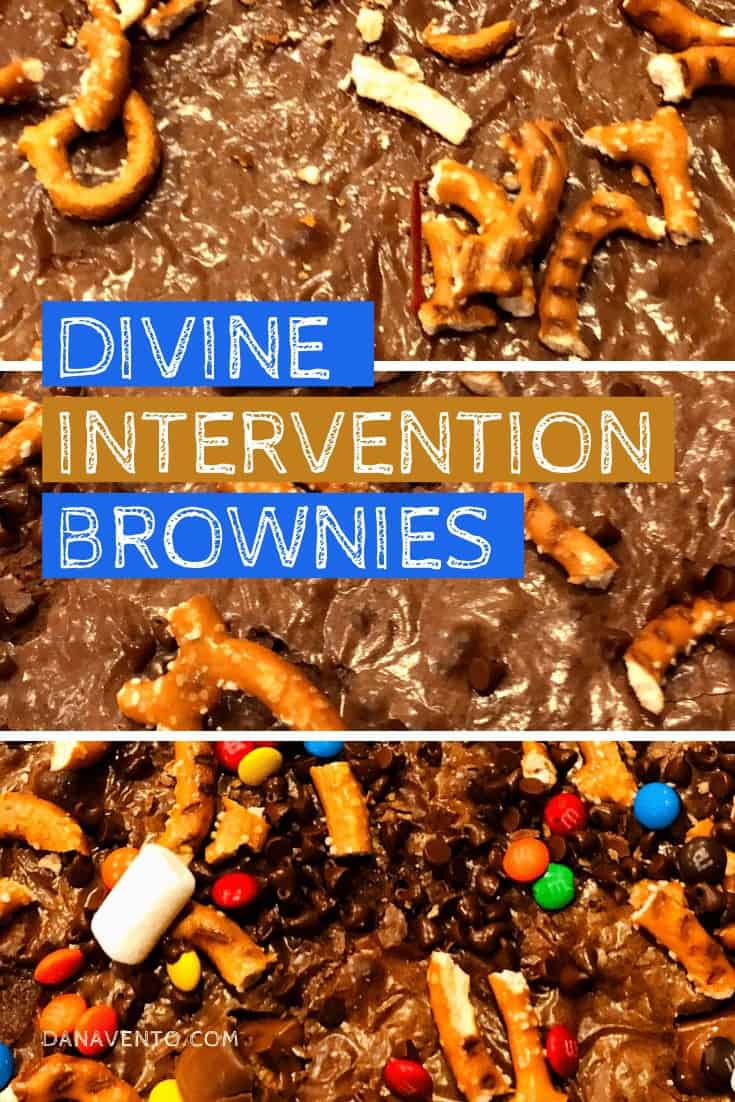 I was preparing a batch of Brownies for dessert. All of this chaos was flying in our house and no one could get an answer.

In spite of everyone’s attempts to get to the bottom of the sulking face, it all failed.

To put it differently, it was time for MOM to dig out the truth and help one of my ‘cubs’ lol.

What Better Way to Get A Teen To Chat than a pan of Fudgy Sweet & Salty Brownies?

With this in mind, I stared at the tray of brownies, I thought to myself, ‘this needs something more!’

What would something more be? By adding other things he liked atop the freshly baked brownie I suddenly offered a brownie of epic proportions.

Too Much Chocolate? Fudgy Sweet Salty Goes Big in Taste

Every bite would be better than the next and by the time the biting was done, and the sugar buzz fresh, we could converse.

After the brownie, or more correctly during the noshing, he began to spill the beans on the whole issue that we needed to get settled.

Before I knew it, everyone at the dinner table was discussing it together.

There was a conversation, that led to a solution. Issue solved.

Therefore, I call these Fudgy Sweet & Salty brownies, Divine Intervention, because when I want my kids to dish the dirt, on what’s going on, I make them.

A few mouthfuls later, and the issues, are resolved. Well, not resolved but at least on the table for discussion to get to ‘solved’. 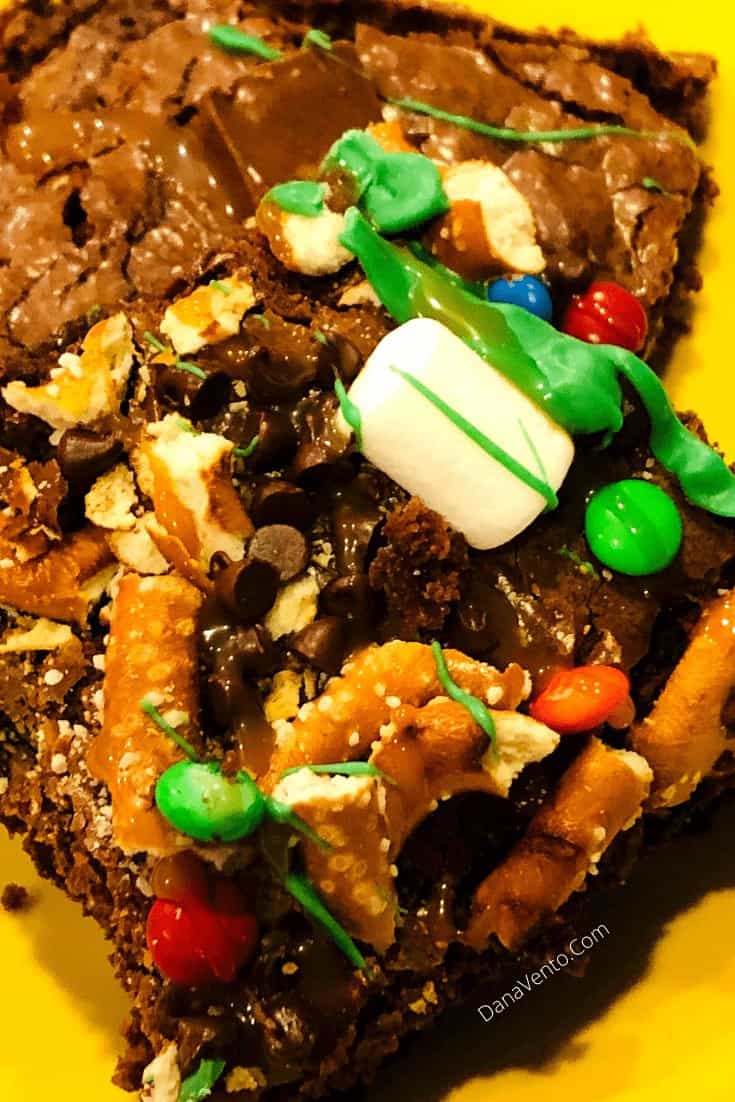 We will never know if it is the gathering of family or time well spent together that creates the formula for problem-solving at its best.

Be that as it may, I keep my odds on the better side making these, lol. Mom needs a win once in a while.

I like to believe it is just the Divine Intervention brownies that create the magic formula of, ‘Issue Solved’ but it always works. There’s that word I hate to use, but must here, ‘Always.”

In reality, I know it is just time spent together that makes a difference, but a little treat helps spur on good conversation. 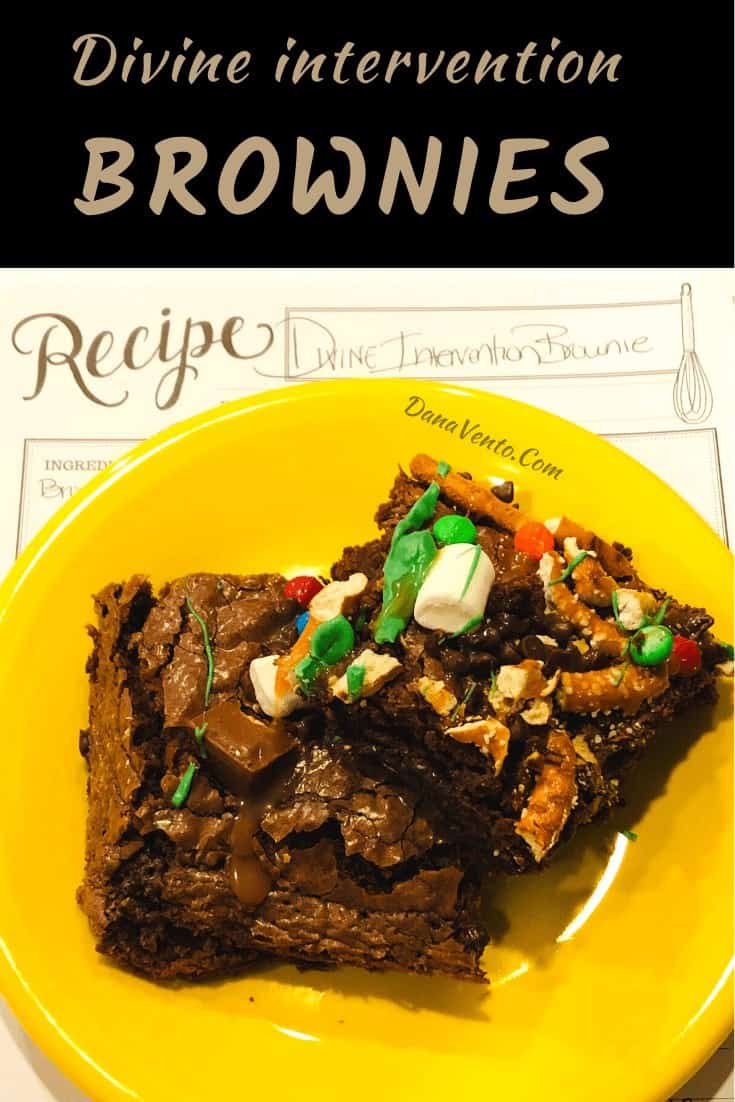 Actually, this recipe is all about the timing and your eye on the baking timer.

Fudgy sweet & salty brownies are happy AFTER you bake them not before.

So keep your eye on the timer, bake them right and be prepared to create fudgy sweet & salty brownies after that oven timer rings.

Work fast, on the hot tray of fudgy brownies, after you remove them from the oven.

You will be pressing in fun pieces of sweet & salty but don’t hold the tray or OUCH!

The success in baking Fudgy Sweet Salty Brownies is Preparedness.

Prior to brownies cooling, add in Kit Kat pieces, and Rolo pieces.

Make sure your melting wafers are ready to go too!

Have a fork ready to drizzle chocolate!

Without delay, the brownies disappear, fast. I don’t even get them cut up and they are gone.

In the final analysis of Divine Intervention Brownies, I’ve learned these are definitely important in our house.

Generally speaking, these sweeten the chatter.

As a mom, we all need our own little ‘toolbox’ of helping things, and this one just happens to work for us, thus, Divine Intervention Brownies. ~ Dana XO 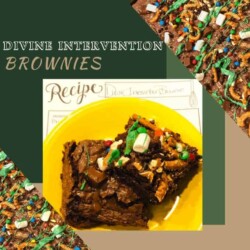 dana vento
These brownies are the most amazing brownies you will eat. Enjoy a range of taste from sweet to salty, chocolatey to fudgy. Truly,  scrumptious divine intervention brownies are the ultimate in craveable desserts or that 'snack' you need after a terrible day!After all, we've all had one of 'those' days, where nothing but sweet, salty and chocolate can help! Nom, Nom, Nom. Divine Intervention Brownies just hit all the marks. Of course, there is a story behind the name of the brownies. These are a conversation starter. I bake this for my kids when I am struggling to fill in the blanks on a story my kid sare not telling me. Since I know something is disturbing or frustrating them, the brownies become the Divine Intervention brownies. There's just something about the sweet, salty and chocolate pan of goodness that brings the conversation out. Maybe it's a good sugar buzz, or maybe it's that we just stop and chat over brownies. From chewy marshmallow bites to a firm side texture, the Divine Intervention Brownies just dare your fork, to take another bite. It's funny how a sweet treat can uplift a less than a grand day, yet take a grand day and make it even better. No matter what, you are sure to hit chocolate in each mouthful of your brownie. After all the brownie is chocolate, and you are going to add more chocolate and of course top it with chocolate. It's not overpowering and one piece is never enough. You can add or diminish the amount of each and every ingredient in this recipe to better fit your preferences. In fact, you can even add different chocolates and add nuts too! You all know my kids have food allergies, so adding nuts in does not happen often unless they are not eating them. Do make certain you are ready with all of your ingredients before you start, and that your brownies are warm and just out of the oven. This recipe will elevate your brownie-eating experience to a whole different level. I always suggest doubling your batch of brownies and using a commercial baking pan in order to really have enough. Don't forget, you can freeze any leftovers (Please there won't be) and anything that falls off the brownie (pretzel or chocolate) is free to steal to any passersby! Enjoy ~ DANA XO
Print Recipe Pin Recipe
Prep Time 7 mins
Cook Time 30 mins
Additional Time 5 mins
Total Time 42 mins
Course In the Kitchen with Dana
Cuisine dessert