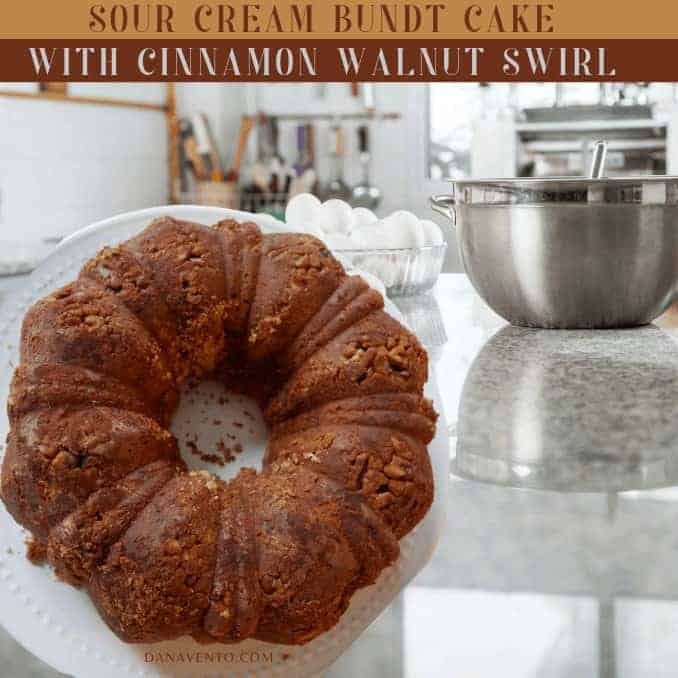 Every year in November, this is the recipe I pull out and bake first.

It’s time to welcome the holidays.

After all, walnuts are the nut of the season and this recipe showcases their depth!

First I’ll say, there are a lot of sour cream coffee cake with cinnamon walnut swirl recipes out there, but they are NOT all the same.

Next, we’ve been making these in my family for over 75+ years and it’s not a cookbook recipe that we follow.

Tradition, handed down from Great Grandma to Grandma to Mom, to daughter.

We’ve tasted and tested so many recipes for Sour cream coffee cake with cinnamon walnut swirl and something is always missing.

The little things we will share today make the difference between ‘eh’ and “YEAH!”

Funny, when I married my husband, my mother-in-law also had a fabulous sour cream coffee cake with cinnamon walnut swirl and had a few tricks up her sleeve as well.

There’s nothing like a different perspective and a recipe that gets tweaked over and over. 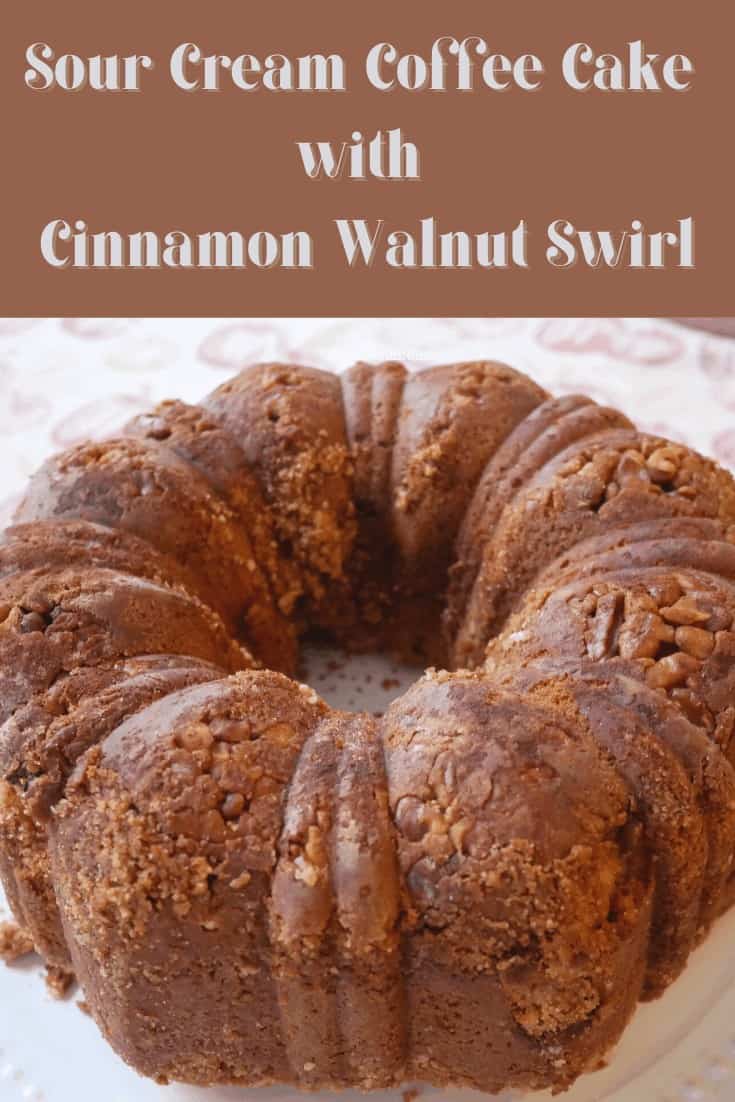 Why would you tweak a recipe that is good already?

Because after all the tweaking renditions, you end up with a bundt cake that has every possible angle covered, to make it stand out from all the others.

Let’s bake so you can taste test for yourself.

The Sour Cream ~ Before You Start 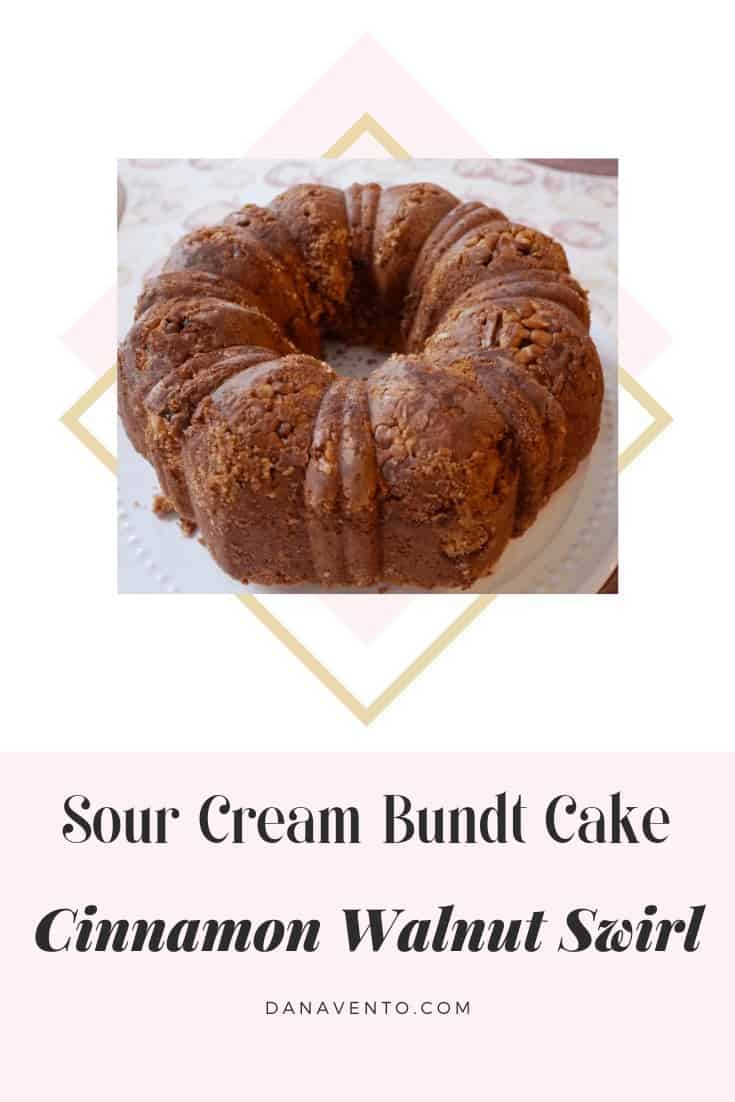 Don’t allow the sour cream to be at room temperature.

Grab it from the refrigerator when you are ready.

Drain the water, you don’t need that.

Simply put, the butter and the sour cream together make an incredibly moist and delicious bundt cake you’ll savor! 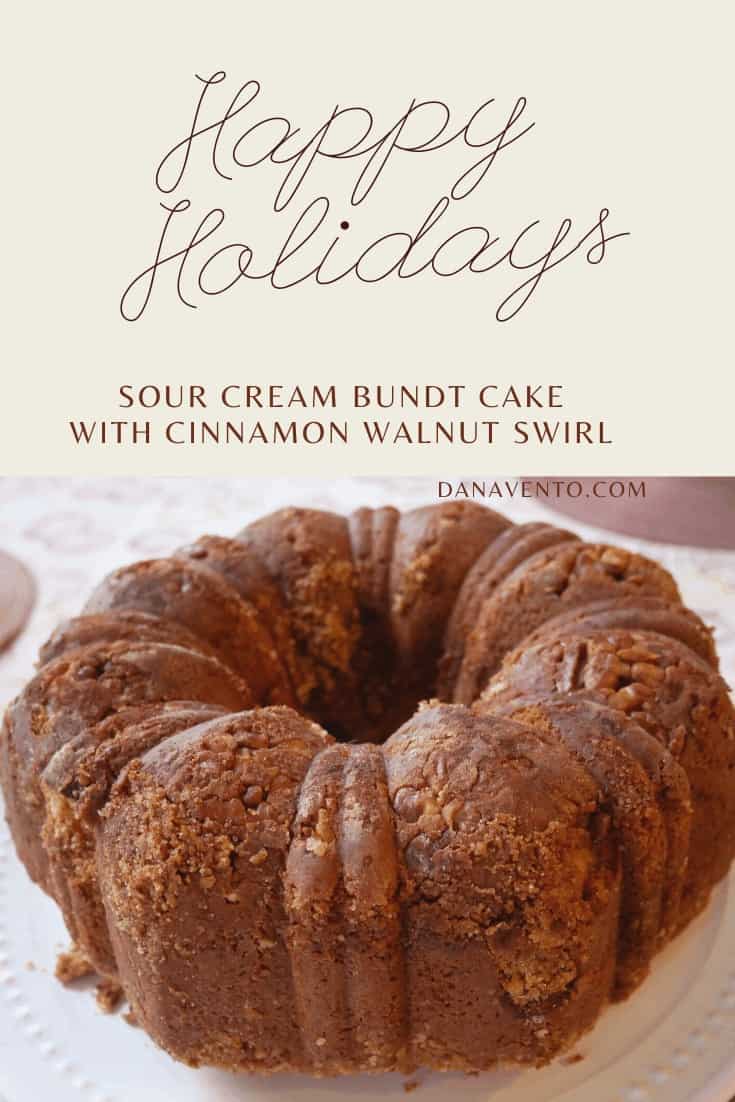 Grind your walnuts for the topping.

When you create the swirl mixture, you will LOVE this change.

It takes the walnuts to another level and ground is a better bake.

Perhaps it’s my Italian way of baking, but it seems to work well.

I believe I add about an additional 1/4 c give or take.

Instead, my Nonna taught me to use a stick of each and thereby eliminate the salt you would have to add later.

I love this tip and I use it in much of what I bake.

There’s salt in everything and you need it when you bake, but, this modifies the need to add it in.

Dust Me With Cinnamon And Let me Bake 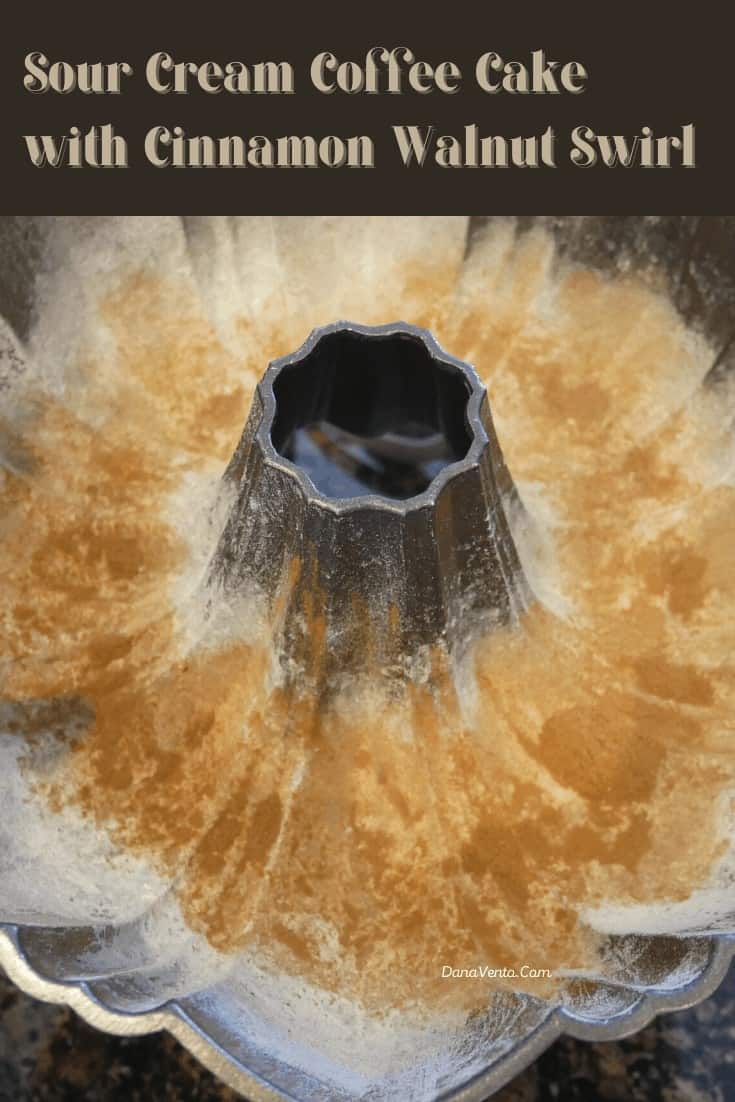 It could be argued that I am a cinnamon nut.

But, baking a bundt like this you really want to shake that cinnamon and dust it as you mean it.

However, I don’t mean adding too much to the recipe, instead, I add it in a different way.

Dust the base of the bundt pan.

You will thank me later. 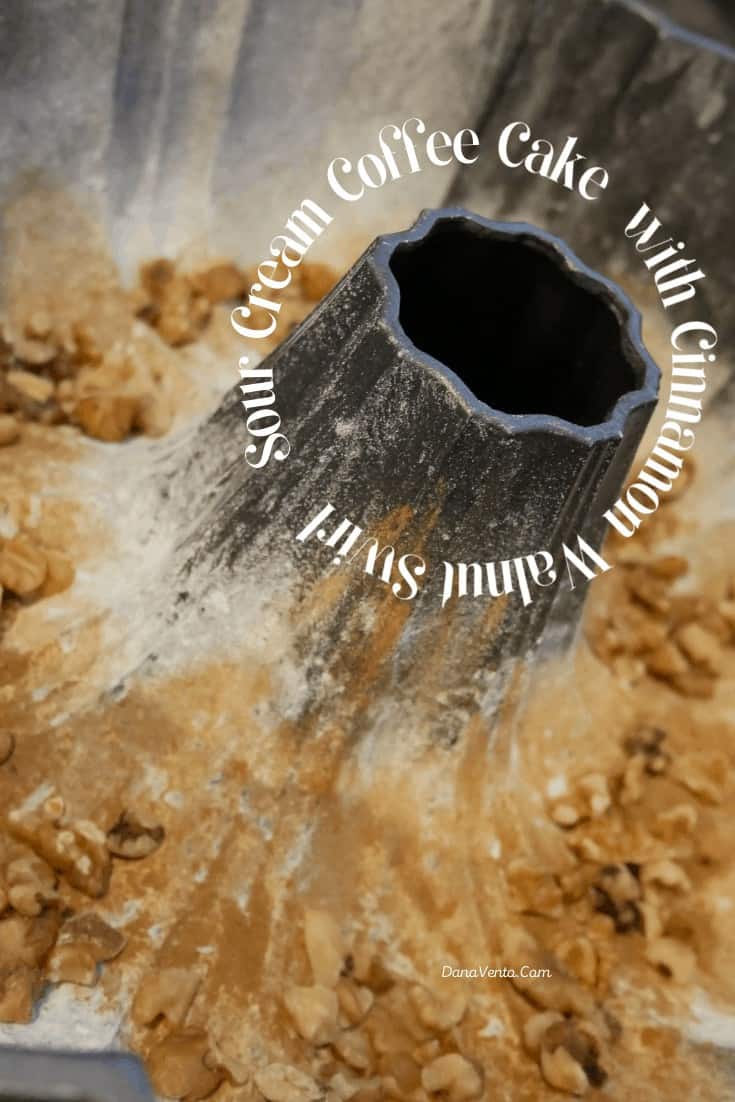 When you take that bundt cake out of the oven and allow it to cool, what comes next is everything.

So, do this right.

Remember I said a few tablespoons of walnut in reserve on the recipe card? 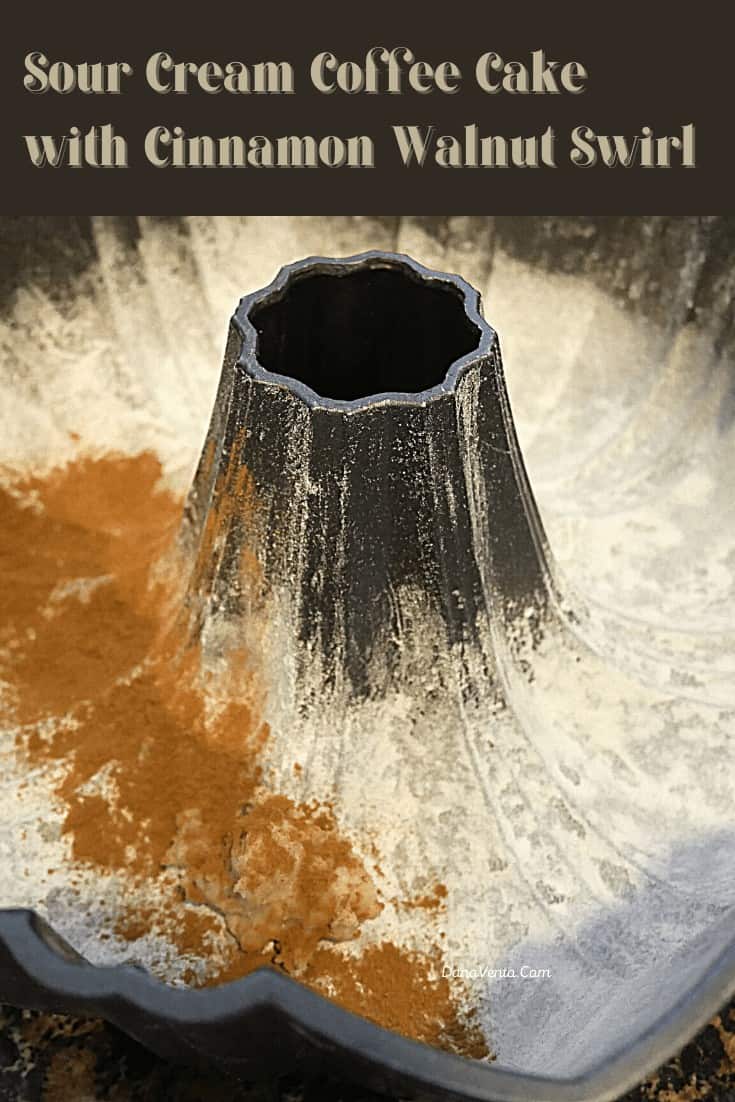 Here is where we separate the wanna be cinnamon swirl bundt cakes from the real ones!

Add those nuts atop the freshly dusted cinnamon, evenly spreading them. 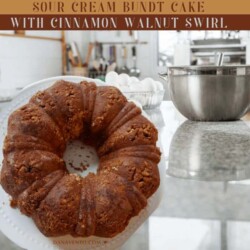 *Spray and use a pastry brush to make sure the grooves of bundt pan are coated. ** If your eggs are not room temperature, run water to make it warm, place eggs in a bowl, and coat with the warm water. Allow eggs to sit for a few minutes and then dry off the egg and crack. You now have room temperature eggs.