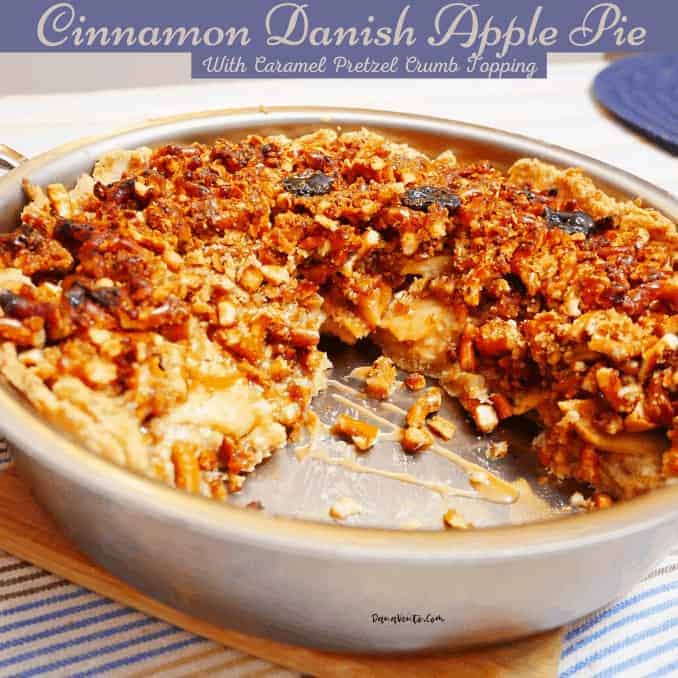 When it comes to Fall pies and capturing the essence of delicious Fall eats Danish apple pie with caramel pretzel crumb topping.

Delicious apples, enveloped in a cinnamon bun danish mixture, with soft caramel, throughout, topped off with a pretzel crumb topping.

Whether you chose red apples or green apples for baking into this pie will really be a personal preference.

Fragrant wafting aromas of cinnamon, butter, and soft pretzels will fill your home.

Just in case you are already craving pies, make sure to try out my dutch crumb apple pie that is a very popular recipe. 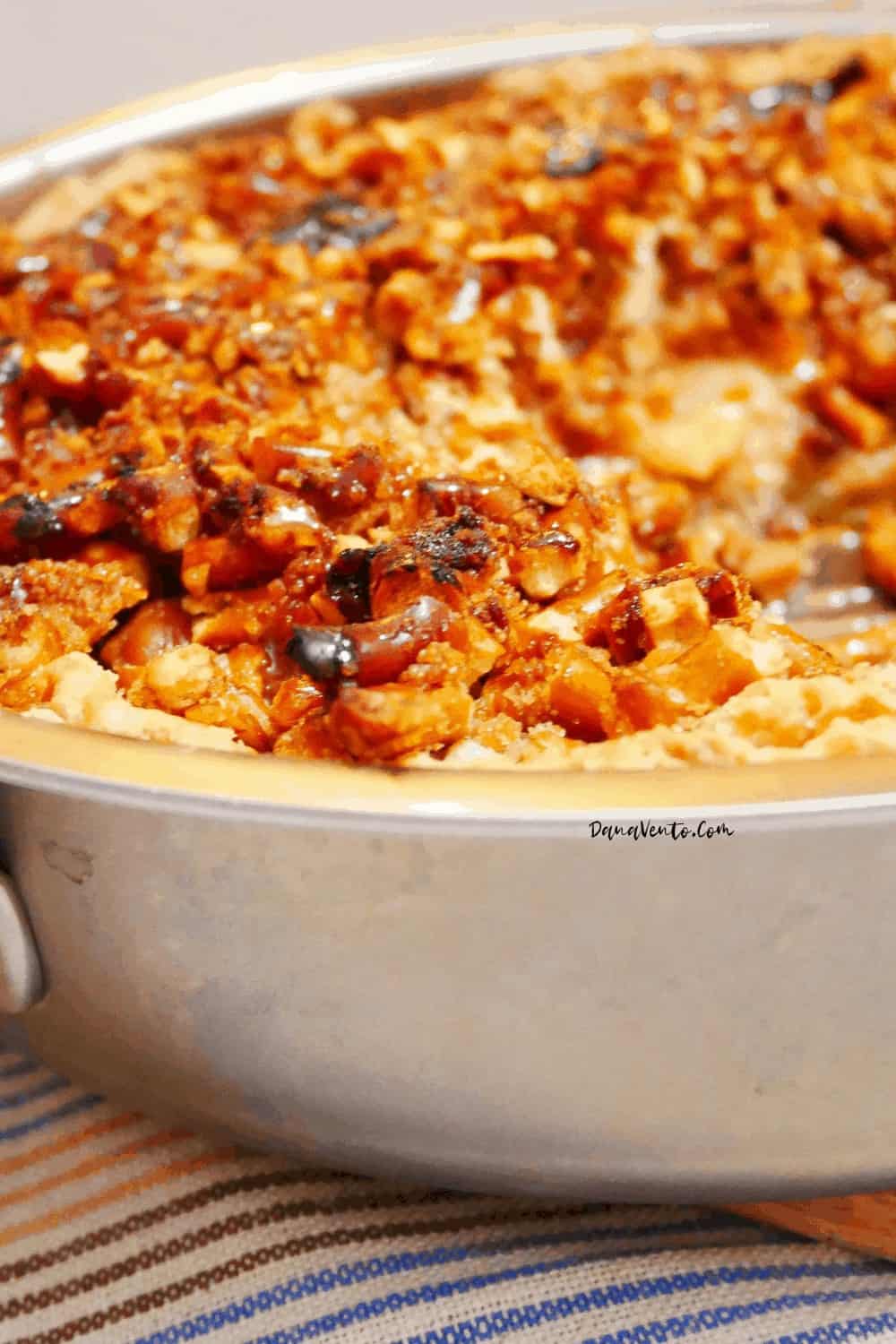 There’s depth in taste with every bite inside this cinnamon danish apple pie.

In fact, the cinnamon Danish is inspired by Trader Joe’s.

As a Trader Joe self-proclaimed disciple, I often share their incredible products (and no they don’t pay me, but they should!).

Today’s episode of In The Kitchen With Dana offers up the best of Fall Desserts!

From the caramel to the apple, and the lightly crunchy pretzels, this recipe has sweet and salty covered from the top layer to the bottom!

Honestly, I don’t know what part of this pie to tell you about first.

There’s a lot to it, but really there’s nothing to it. 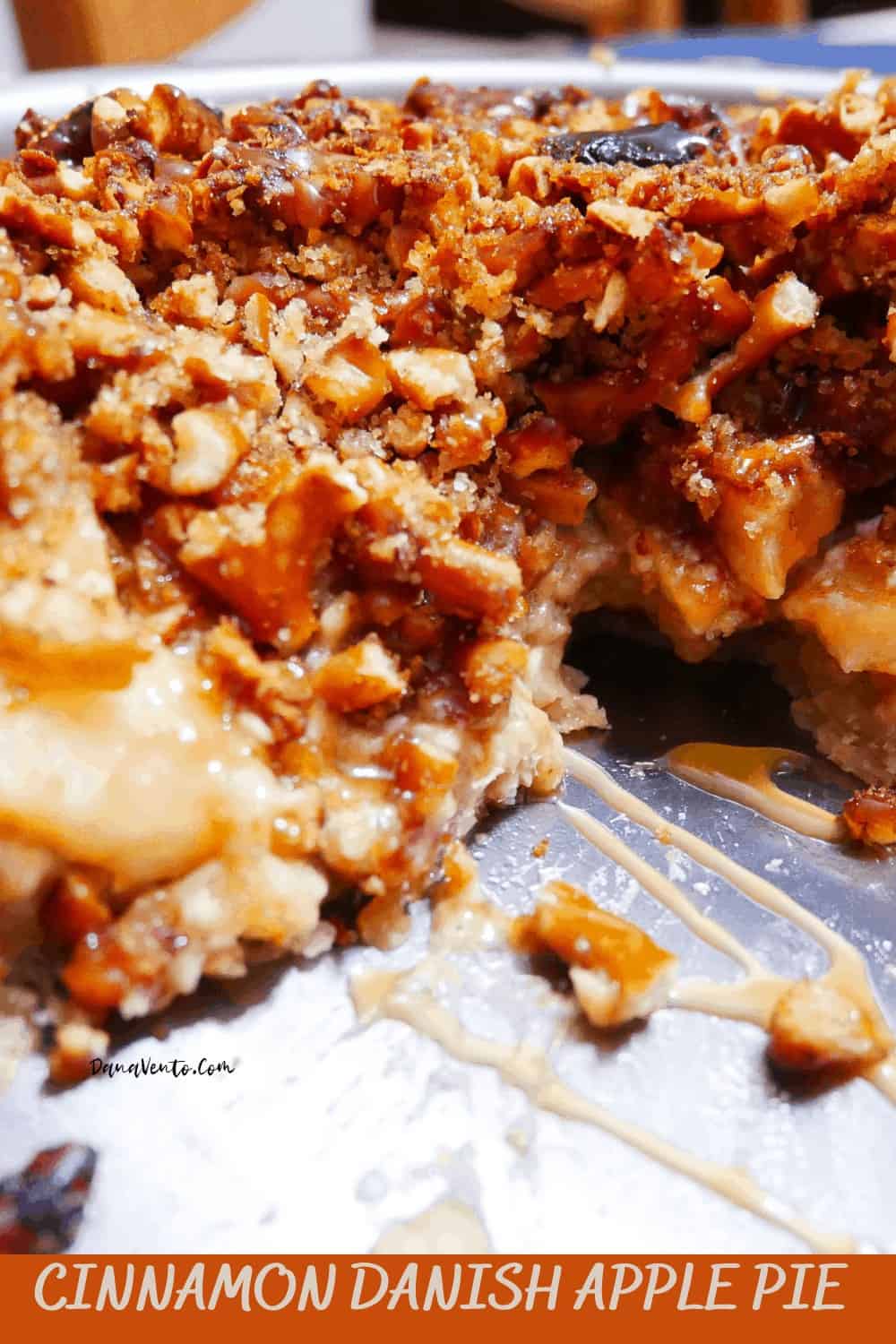 Let me start with this, refrigerate any leftovers.

However, if I am being transparent, there won’t be any leftovers!

I Didn’t Use A Pie Pan – Call Me A Rebel Baker LOL! 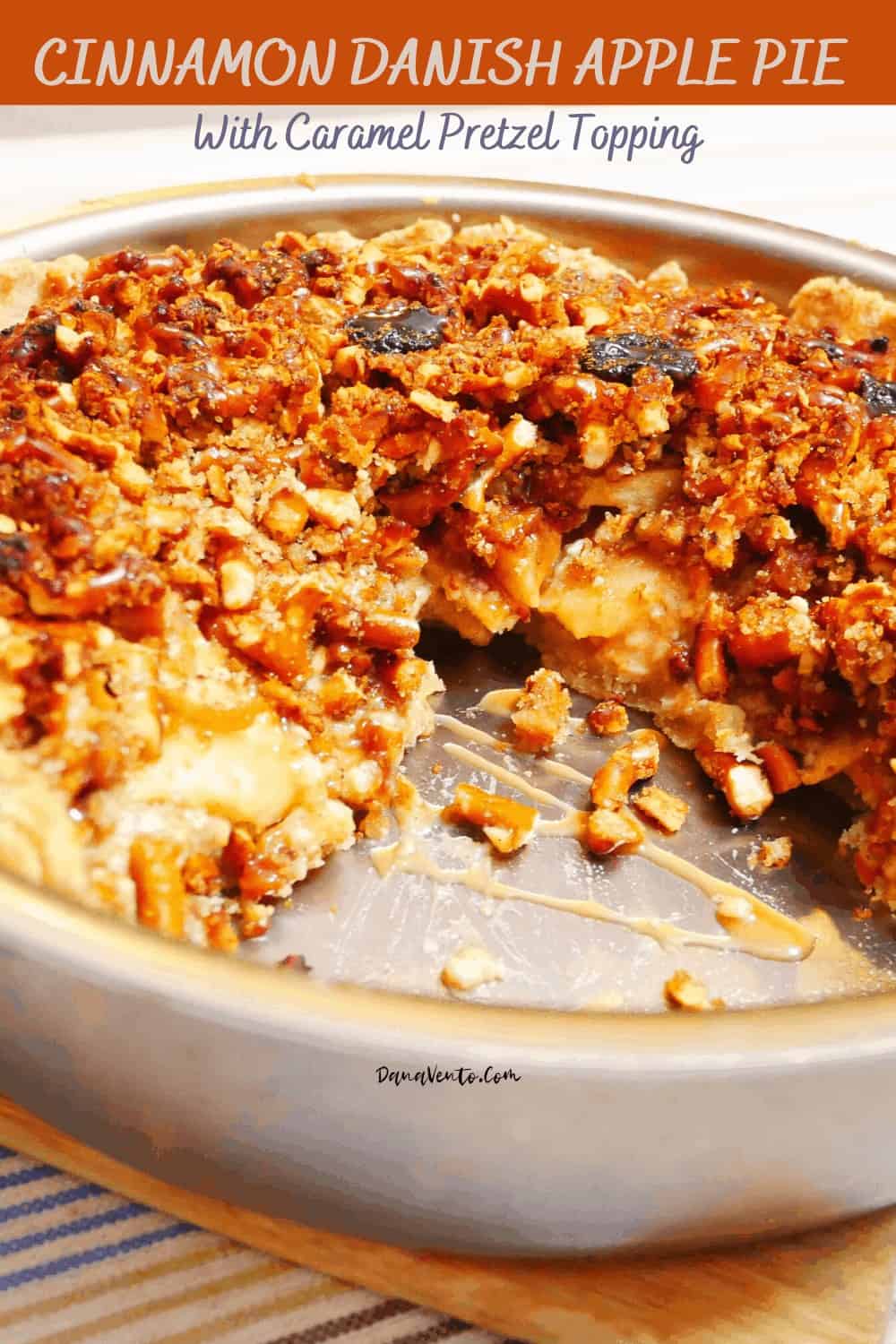 Instead, I used a cake pan, not a pie pan.

It’s the best thing I ever did! 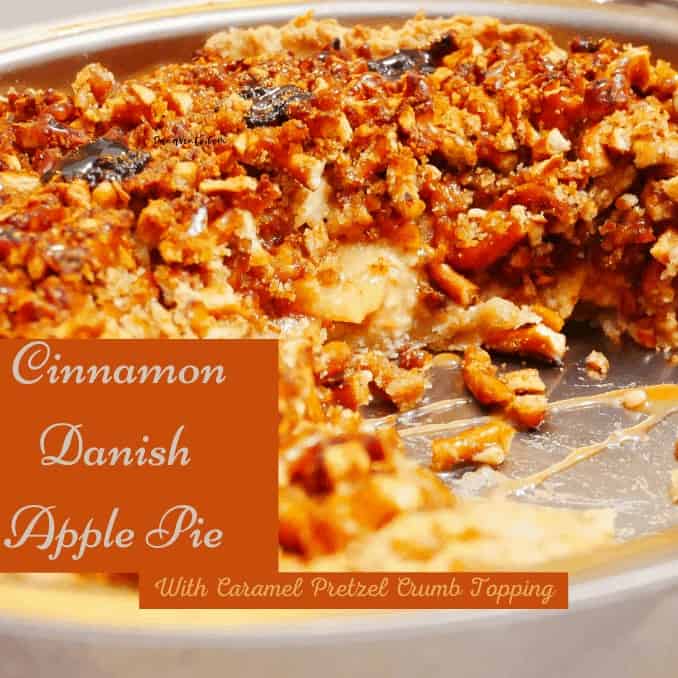 With the pretzel caramel topping, you will be happy to have a deeper dish for your pie!

This means, yes you could use a deep pie dish, but, again, I did not.

In so many of my recipes, I use my favorite 360 bakeware.

Also, I can offer you the bakeware at 20% if you need new cake pans. 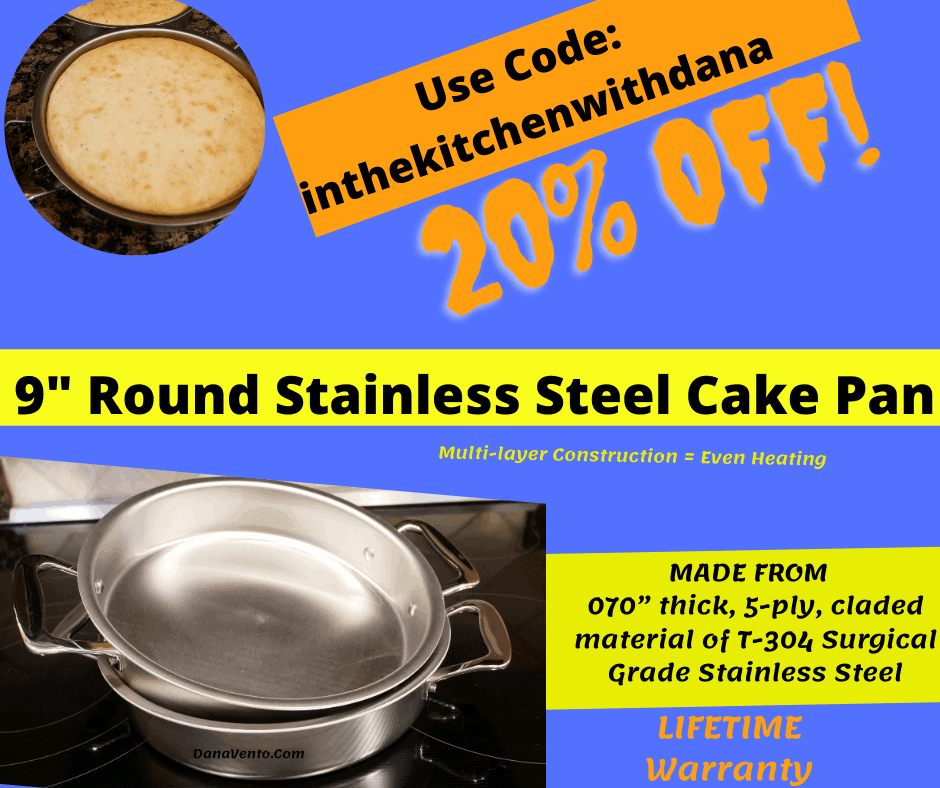 Grab my Soft Caramel Recipe Here and use it for ice cream and this recipe!

A Word About Xanthan Gum and Cinnamon Danish Apple Pie

I use Xanthan Gum in a lot of my cooking.

Do not use more than I suggest or you will have a very dry, thick mess.

For those that have not used it and want to buy it, you can get Xanthan Gum online, and sometimes it is cheaper than in the store (eyeroll) like this brand!

However, if you prefer not to use Xantham in your recipe you can eliminate it, your Danish batter may not be as thick as mine.

A little bit goes a long way, and after you mix it in, wait for about 2-3 minutes to see how it is setting up.

Don’t add more or you won’t be able to SPREAD this. 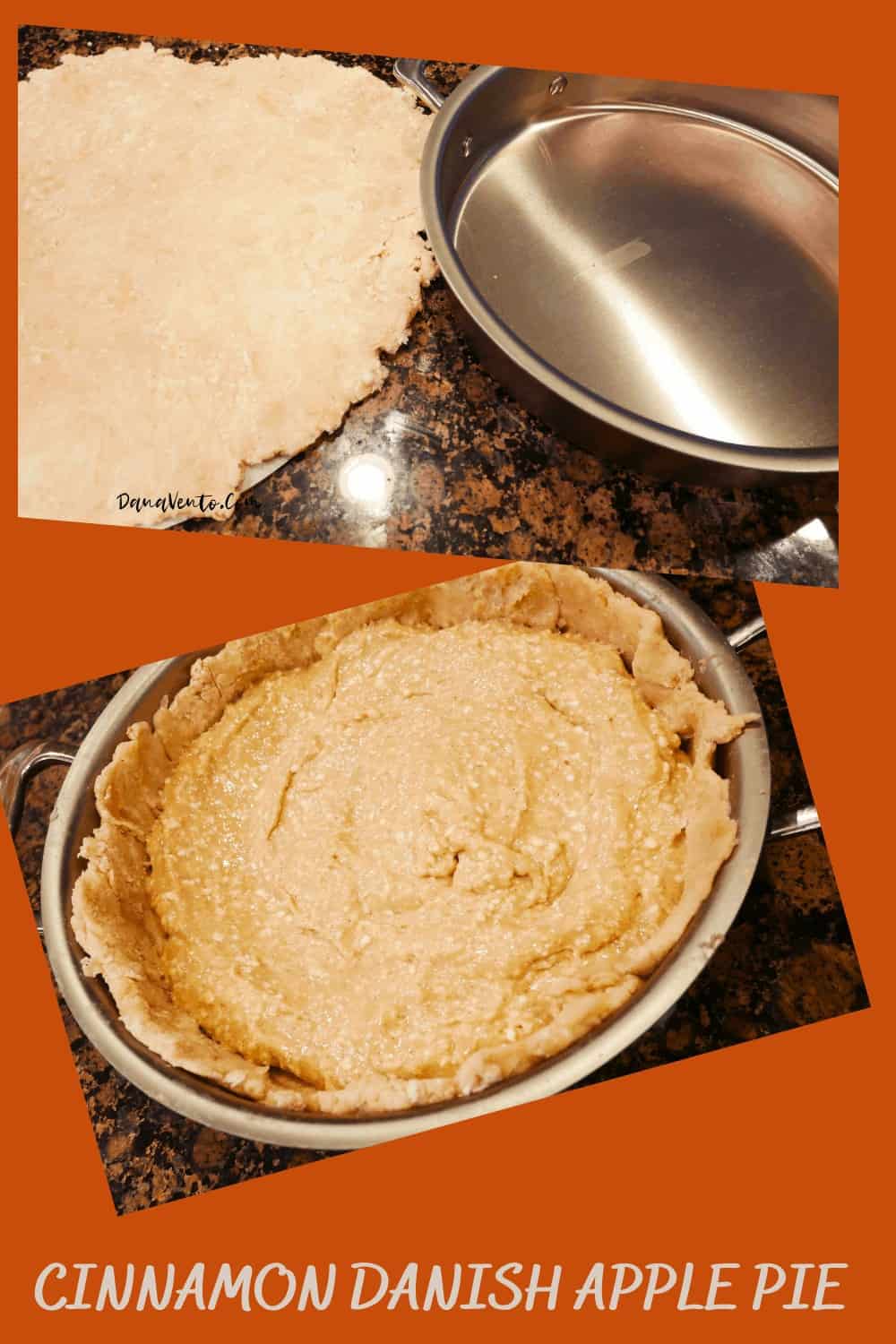 If you prefer to use a purchased pie crust, go for it.

I am sharing my mom’s pie crust recipe, and it was her mom’s recipe (the baker whom I write about a lot so buckle up and get ready for the perfect crust).

The funny thing about their crust is that when I check out pie crust on the internet, a lot of people have the exact same recipe.

Maybe pie crust is just that basic or is it?

If you want to flavor the pie crust you can.

Do you remember that I made those Air Fried Pie Crust Snowmen?

However, if you make a pie crust I suggest using a round silicone baking mat to help you make the right size pie crust!

Plus when you go to flip it into the dish, it does not break!

It’s a Trader Joe’s Thing But… 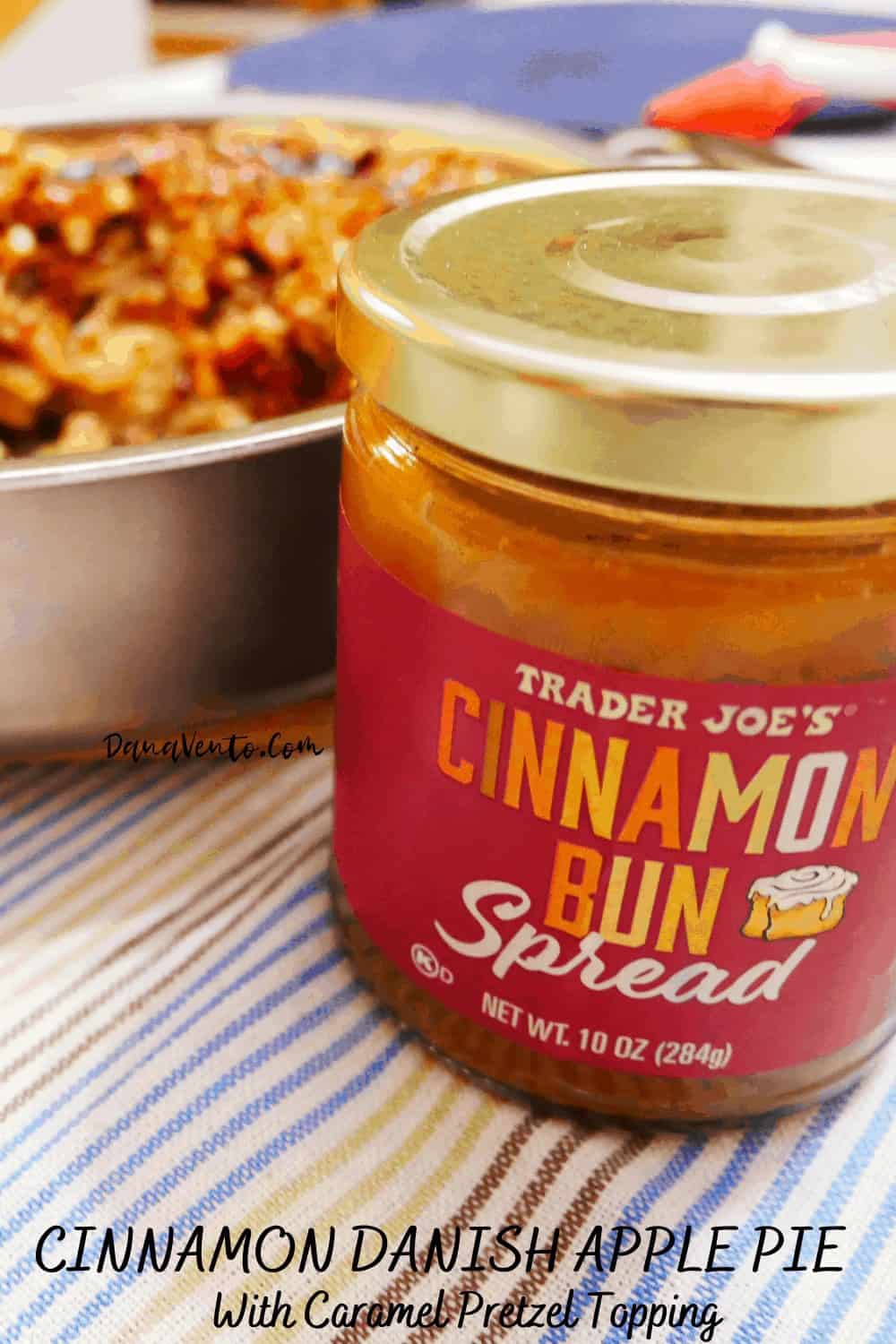 The employees are the best and I never lack for finding a product that I can incorporate into a meal differently.

So, if you are familiar with Cinnamon Bun Spread at Trader Joe’s then you will totally understand it’s depth.

In fact, I think you will already have dunked your apples in it, or maybe even carrots (oh, was that just me, sorry!).

If you don’t Shop at Trader Joe’s then grab the Cinnamon Bun Spread here.

It’s a seasonal item and you gotta grab it before it’s G-O-N-E.

Just in case you don’t get your hands on it, you can make cinnamon bun spread by adding some honey and more cinnamon.

Of course, you will want to add a little more butter as well.

But you can totally eliminate the ingredient and just add cinnamon to the danish mixture.

Last, use cinnamon butter but not too much (and this is where Xanthan Gum becomes your best friend!)

Here’s a piece right out of the oven, I know I should let it set, but I want you to see it at its most vulnerable moment! 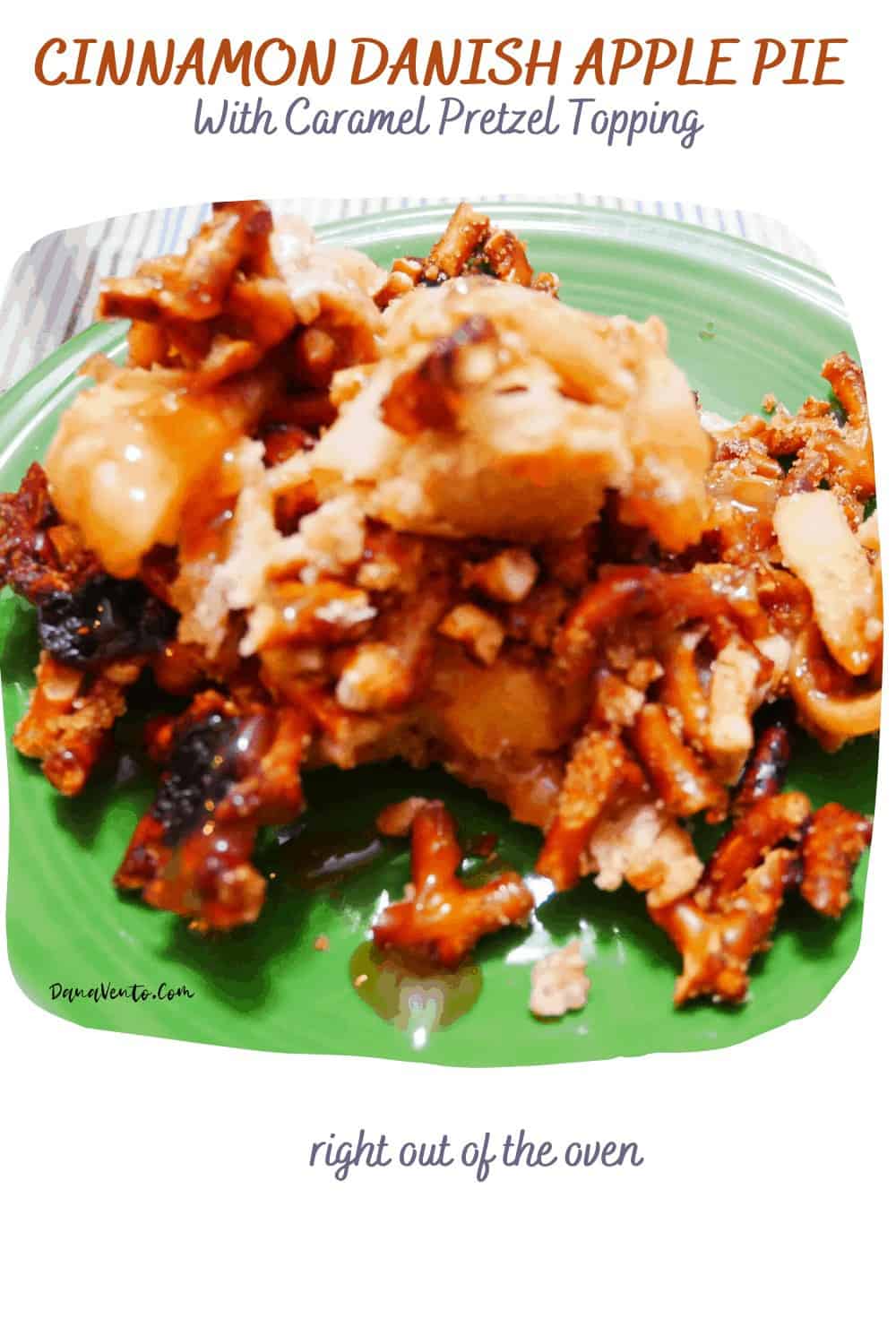 I wasn’t going to show you this photo, because it blurred a bit, as I was running to grab a call in the midst.

However, you gotta see this, it’s so, well… yummy looking! 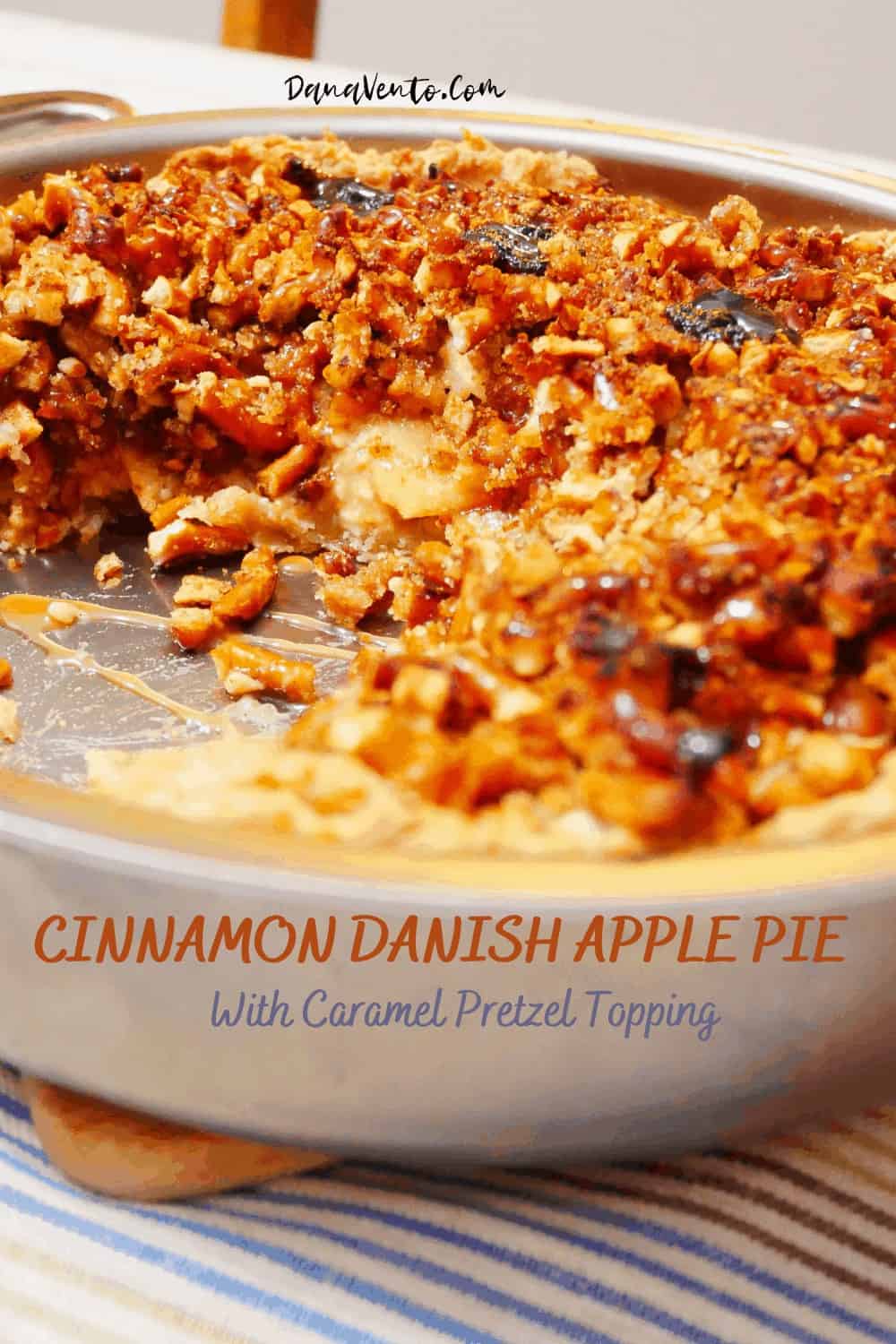 So, to be clear, the caramel (unless you place it on top as I did, see the black blotches) will burn.

However, I totally love that flavor in small doses, you may not.

Therefore (and here’s a secret twist) the caramel is atop the apples, not atop the pretzel.

Yep, your crumb topping starts as soon as the apples are placed.

To that end, try to make sure to scatter the crumb topping atop any exposed caramels.

See my caramels atop the little burned pieces, you may not enjoy that.

However, in my world, it’s like really toasted marshmallow, so I am into that taste, strange as it may be! 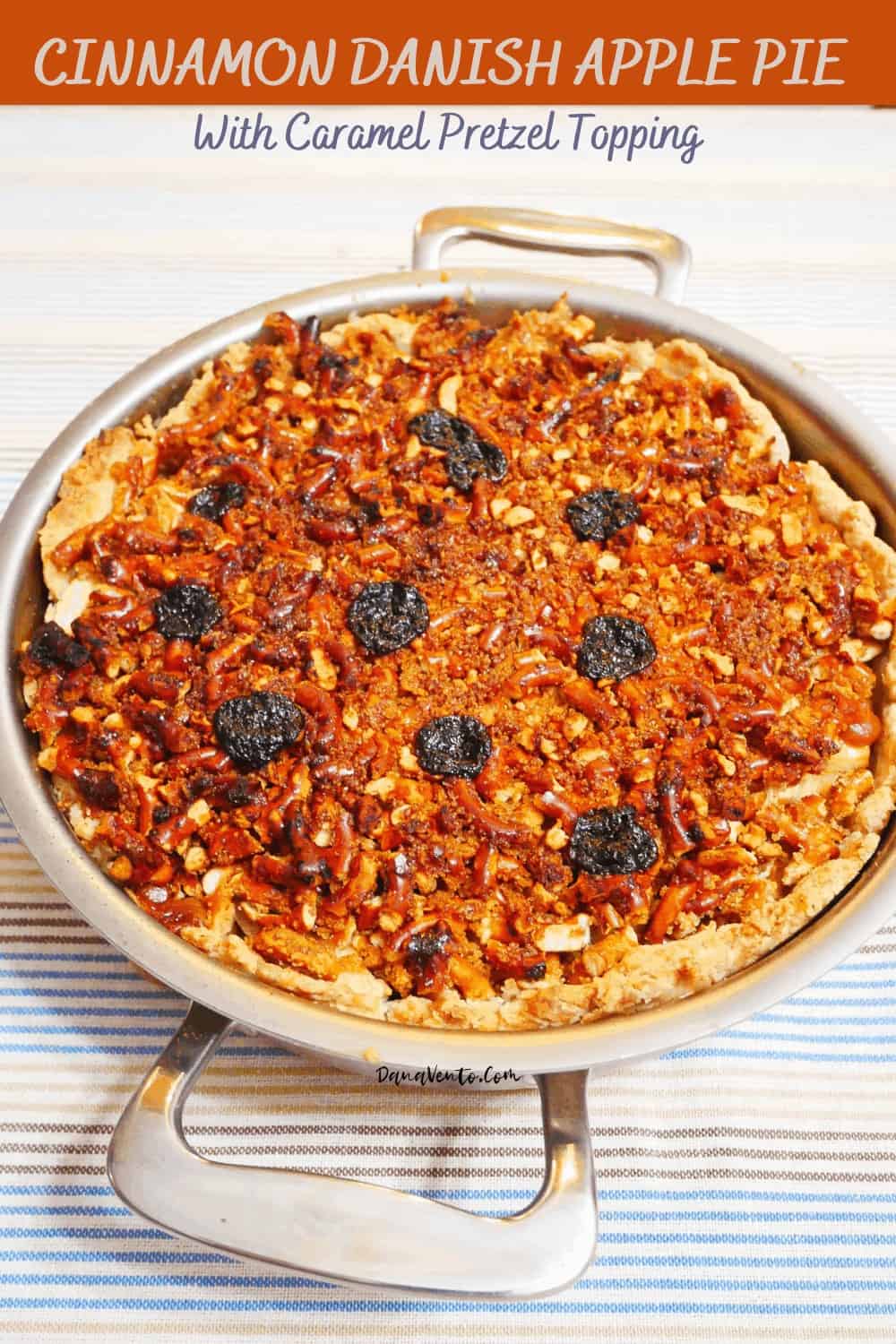 In order to do that, make crumb topping cover almost the entire surface.

For a really tasty treat, you could use flavored pretzels.

Just make sure to really make the pretzel bites small enough that you don’t cut the roof of your mouth when you bite. 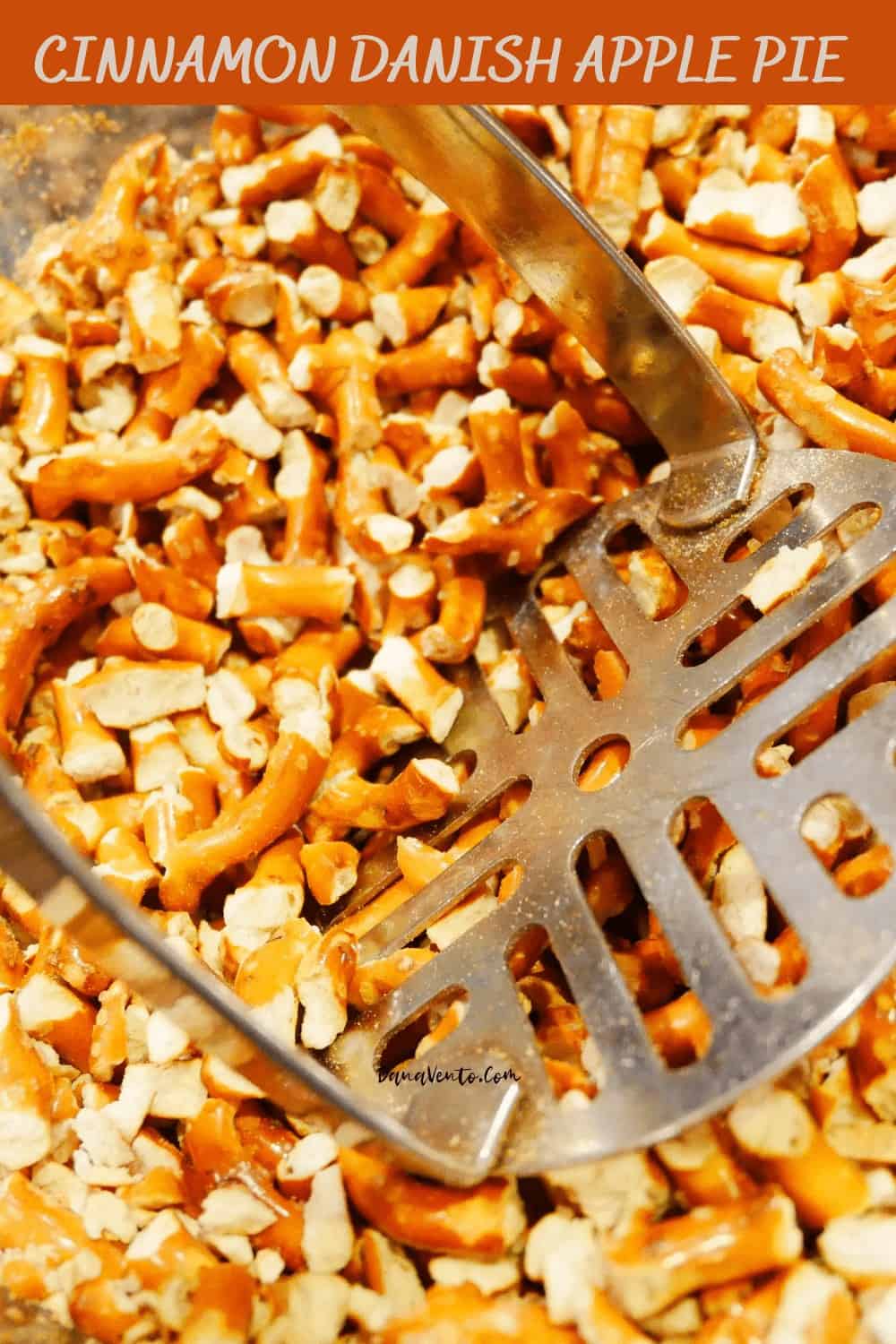 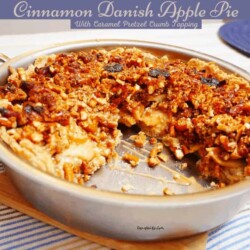 Caramel burns atop the pie. Keep a watch on the pie at the high baking temperature.