Sugar and spice and everything nice, well, that’s not how this story is starting, lol.

Really this is about an obsession for these tasty peppered cinnamon-spiced pecans.

Overall, my recipe for peppered cinnamon-spiced pecans is a great snack for any party and I make them the most at Christmas!

Yes, you can use the jump to recipe button if you want to start creating! Go you.

I love being able to offer something that appeals to more than just one person and the answer is packed in a handful of these pecans.

Far from traditional and also a simple nut recipe that can be tweaked to your personal preferences, it’s a treasured recipe that will turn some heads once tasted.

The crunch of the nut, against the sweet ant the fiery is definitely the most appealing part of the simple recipe.

Once crunch and you’ll taste naughty and nice!

Combining my love of pecans and my mom’s recipe, I’ve made this as simple as can be!

And so, for those that love cinnamon and spice and everything nice, this is your recipe.

Whether you are hosting a party, creating homemade gifts to share this season, or just want something delicious to munch on, try these.

My ♥ for Peppered Cinnamon-Spiced Pecans

At its core, my obsession with pecans was inherited from Grandma Stella.

She’s the baker I always refer to when I write my bread recipes.

Accordingly, my mom used to make a version of these perfectly sweet and savory spiced pecans.

Therefore, really it’s all pecan-tastic history from there.

Here’s a bonus, there is NO EGG in this recipe!

Sweet and savory, spicy, and perfect in every way!

Additionally, when it comes to time, your investment in making these is just about 10 minutes!

Now, who’s ready to crunch and savor these flavors by the handful?

Remember, when I make recipes, I keep them simple.

Using spices like cayenne, cloves, cardamom, sea salt, and pepper makes it a basic recipe as most of us have those in our pantries right?

Plus, pecans are easy to find in a store is unsalted butter. Don’t worry you can sub in salted butter if you don’t have unsalted.

So, today’s recipe follows my own protocol, simple, sweet, spicy, and savory!

As a result, the ingredients in this recipe are basic, and most of us have these in our pantries.

Consequently, your time investment is about 10 minutes active prep, so again, easy.

Of course, for those who regularly read my recipes you know, I love switching up honey for agave.

However, in this recipe, honey should be used and not agave.

Additionally, I suggest the use of organic products in any and every recipe you create.

Because you need to know this: I would never dream of preparing this recipe if I didn’t use a silicone mat.

To that end, the stickiness of the syrup would be impossible to clean up.

SO yes, I just totally suggested a silicone mat for this recipe and YOUR kitchen.

Accordingly, above (in photo) I’ve also worked my magic with these on parchment paper.

All in all, my thing about parchment paper is sometimes it still gets moist or makes the tray nasty so it’s not solid all the time!

Double the recipe for more party food at once.

Store the other half immediately in an airtight container and use it later or gift it!

Add different ingredients to change with the seasons.

Also, a zest of lime and chili pepper on this is awesome!

Try this easy Holiday Craft to put on the counter next to the nuts, it’s a fish bowl snowman.

Change This Up – Peppered Cinnamon-Spiced Pecans

Therefore, don’t get stuck in a rut of trying a recipe and doing just what it says, change it up.

To that end, just toss in a few flakes of sliced raw almonds.

Or, how about some cranberry pieces (dried)?

In any event, you could even put some peanuts on these if you LOVE peanuts.

My Party Gift To You Is Hot and Sweet Peppered Pecans

Really change this to make it yours.

In short, consider this recipe a springboard waiting to be embellished.

Yep, hot and sweet peppered pecans are that easy, don’t you love that?

Get ready to nibble on a fiery and sweet snack with some protein!

Then, sit back, and enjoy the compliments you will receive for these amazingly hot and sweet peppered pecans, which is most gratifying! 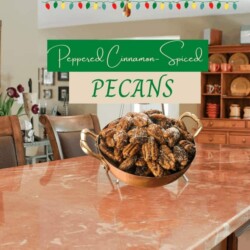