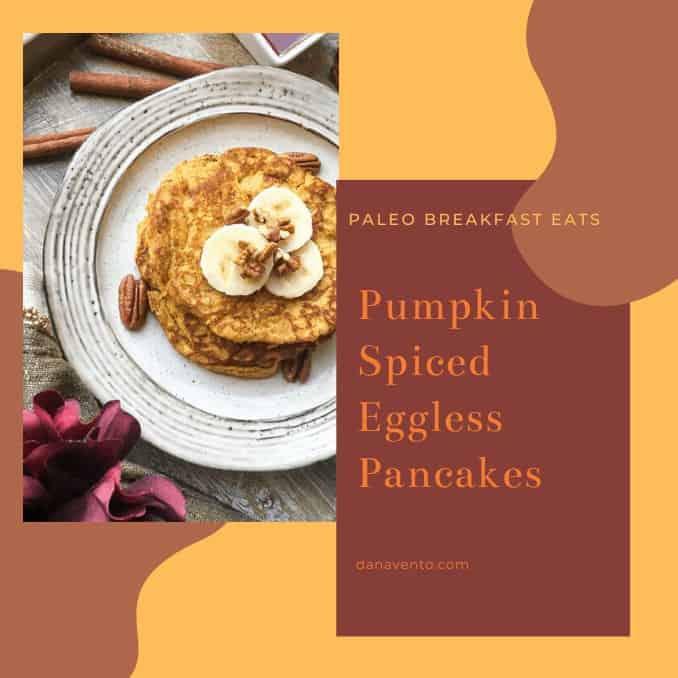 If your idea of eating is Sugar and spice and everything nice, this recipe will be one that you will enjoy, but there’s no sugar! Paleo eating to me is whole fresh foods, not processed. No sugar here!

For those searching for a really tasty recipe that makes a weekend a weekend, and puts the F for Flavorful eats in the word FALL, you’ve struck pumpkin spice gold.

Not a huge fan of eggs, I have done something drastic in my pumpkin-spiced eggless paleo pancakes.

I did not use any!

In fact, the carb count in these since there are no wheat or grain-based flours.

Get ready to serve some seriously delectable pumpkin-spiced paleo pancakes!

Serve them or weekday or weekend, and you might want to double the batch to have a few leftovers for the week!

Sometimes I look at a few recipes and roll my eyes.

Where is the flavor?

Why are there so many carbs?

I ask a lot of questions and then I reinvent recipes. 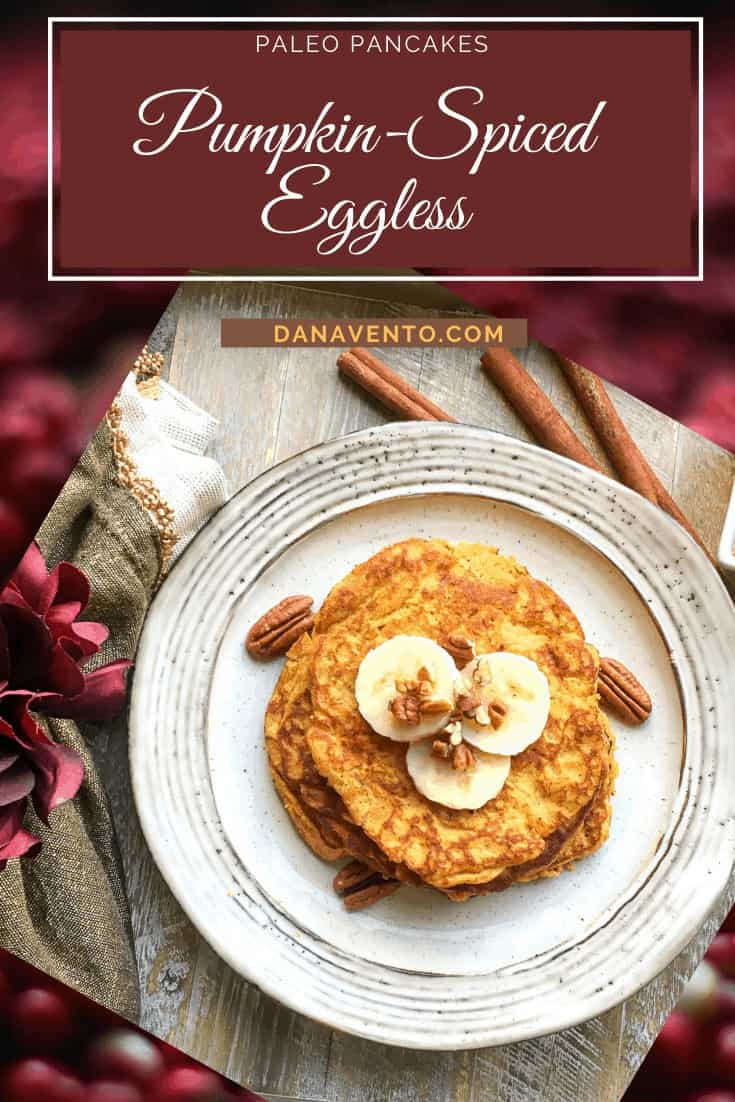 You could say that is how I stumbled upon this recipe years back.

We had purchased pancake dry mix in a package and more or less I tasted cinnamon and pumpkin pie spice and lots of other weird flavors.

What I did not taste? Pumpkin-spiced pancakes.

From that day forward I worked to create pumpkin-spiced eggless paleo pancakes.

To be fair, I’ve been eating clean for years, before it was ever trendy.

Recently ingredient offerings are so much easier to find than before and now because of it, so many have gone Paleo! 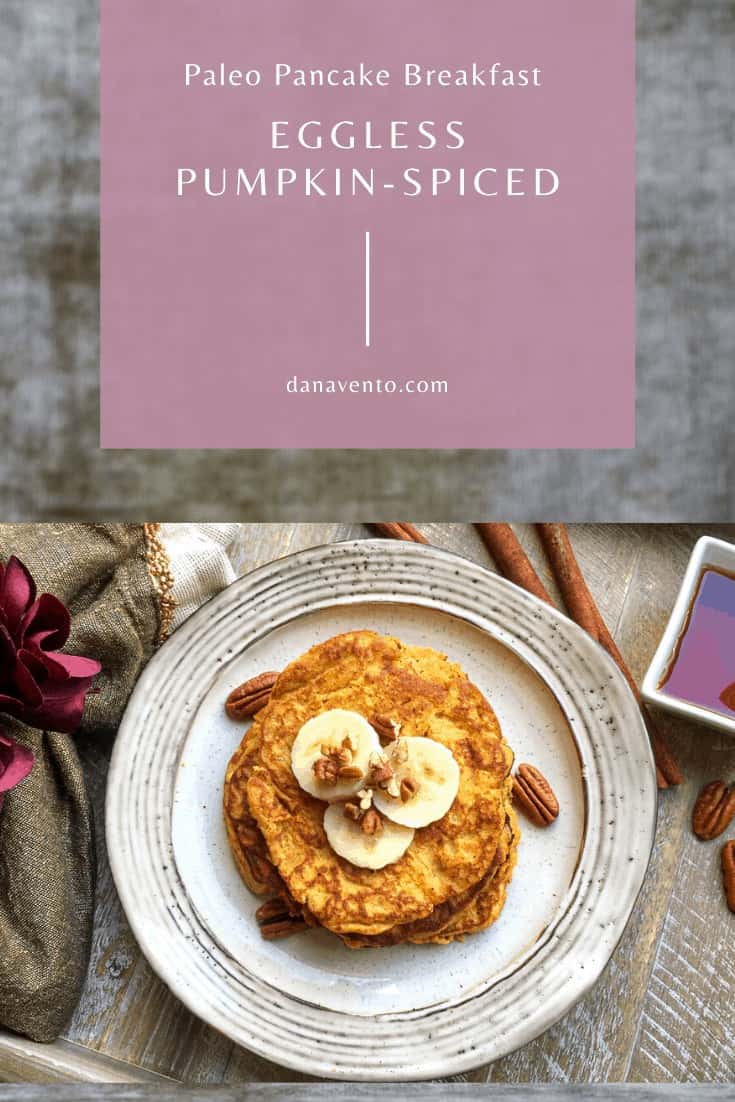 Good for you for making that choice, but don’t ever think you have to settle for mediocre!

You see cooking with Coconut Flour and Almond Flour provides lower carbs as they are not wheat or grain-based. How wonderful right?

Just add in eggs, just change it to 6 whole eggs instead.

If you dislike eggs as I do, just use the Egg Replacement. 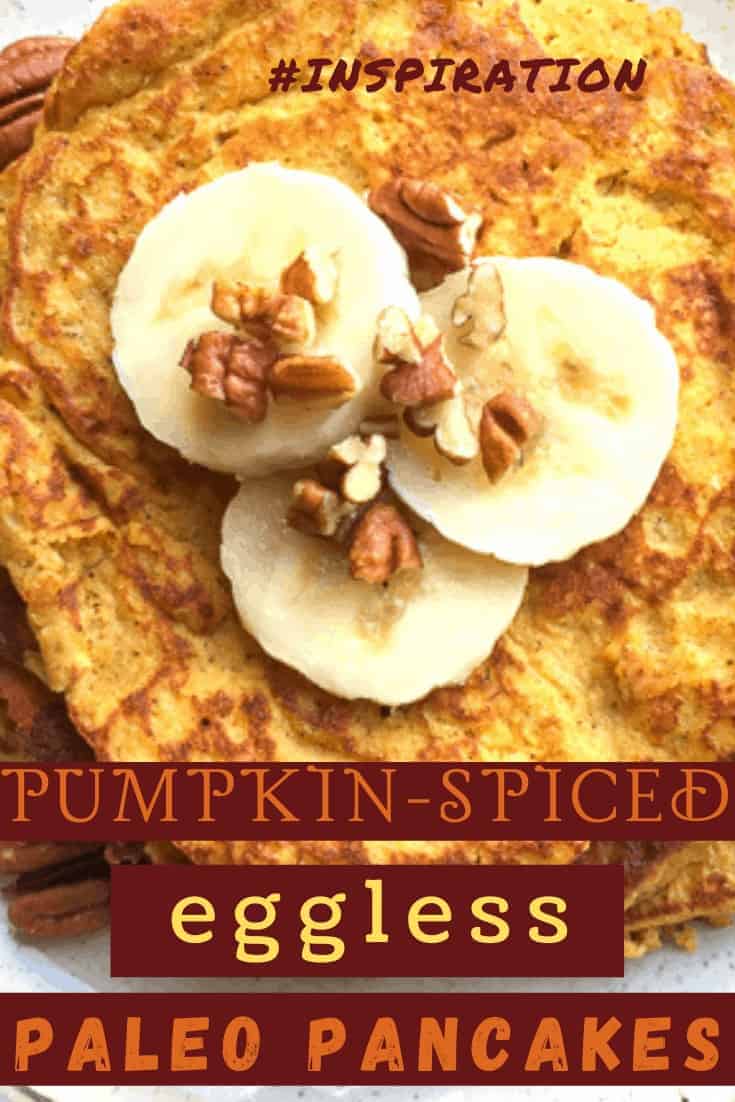 You will note that you can change up the ingredients and sub, as all of the listed are paleo-friendly.

I simply use whatever nuts I have on hand, and I have even just used all almond flour or all coconut.

Subbing in all coconut flour is not something I suggest trying unless you have vast experience with this particular flour. Read on.

The only flour I suggest as changeable is the almond flour unless you are pro at paleo and interchanging these flours.

Here’s the thing, I have had so much more success in subbing in almond flour for coconut flour rather than vice versa. 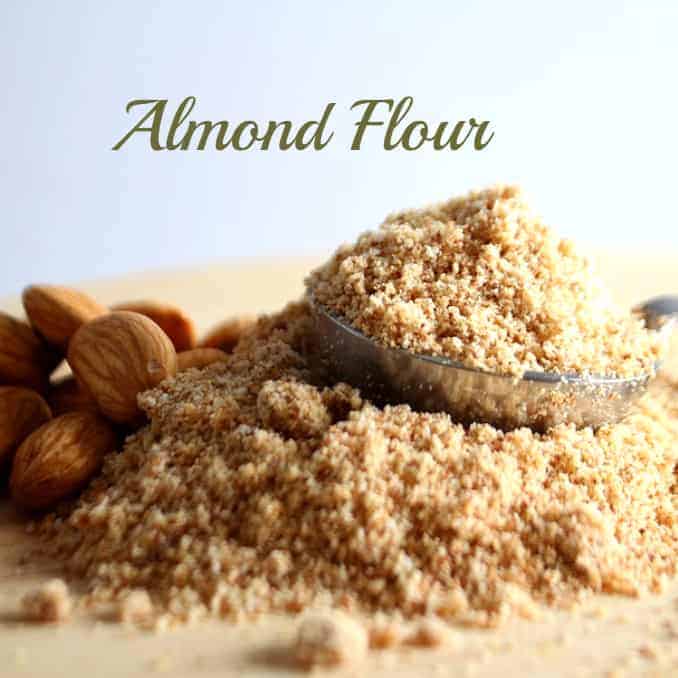 It’s sad to say, my learning curve gets better with each try, but it has taken a long time to get to this point.

Want to know why?

Because coconut flour is its own little beastie.

So if you are out of almond flour, go to the store, lol!

Conversely, if you are out of coconut flour, it’s all gonna be ok!

Almond flour is a little tricky, but once you’ve worked with it, you will understand.

The trade-off of lower carbs is so worth it in my opinion!

The trick is getting almond flour to be a little less moist when prepped.

Simply put, decrease your egg replacer to only 1/2 C of water and 1/4 C of Egg Replacer.

Mix and let sit for one minute up to 2 minutes.

Sub the almond flour at 2 C and keep it handy.

There may be a need for a little more, but, you will know it as soon as you see the batter. 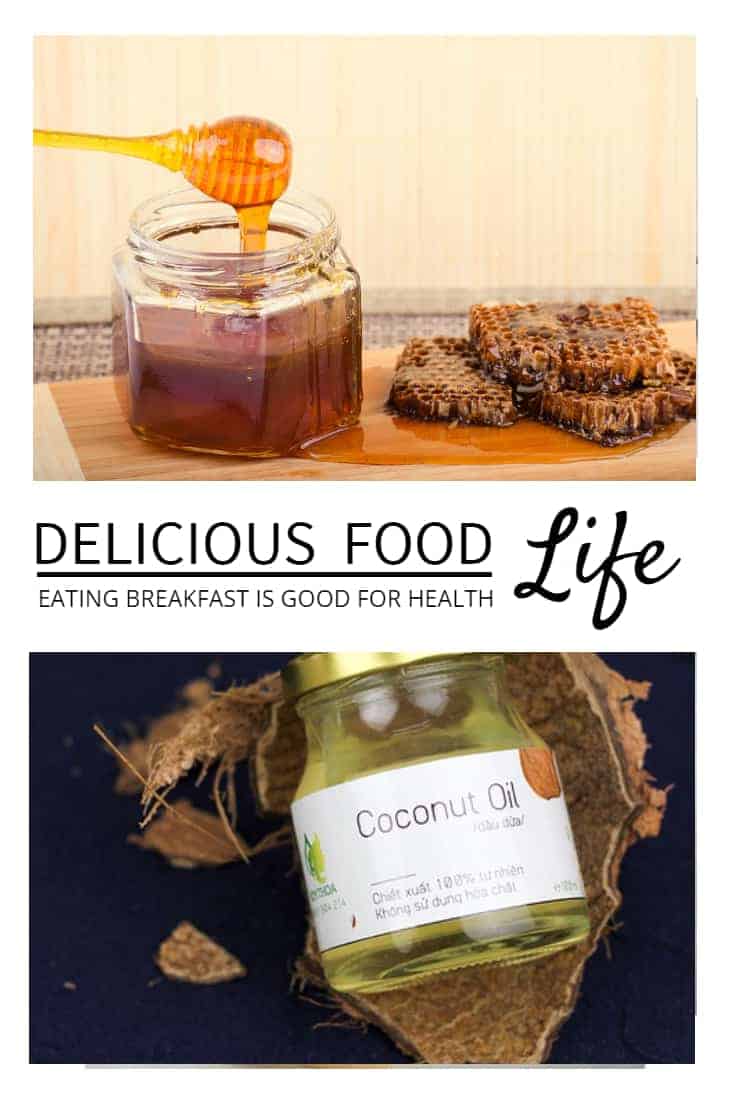 Before making these pancakes, you’ll want to make sure you have these ingredients in your pantry! 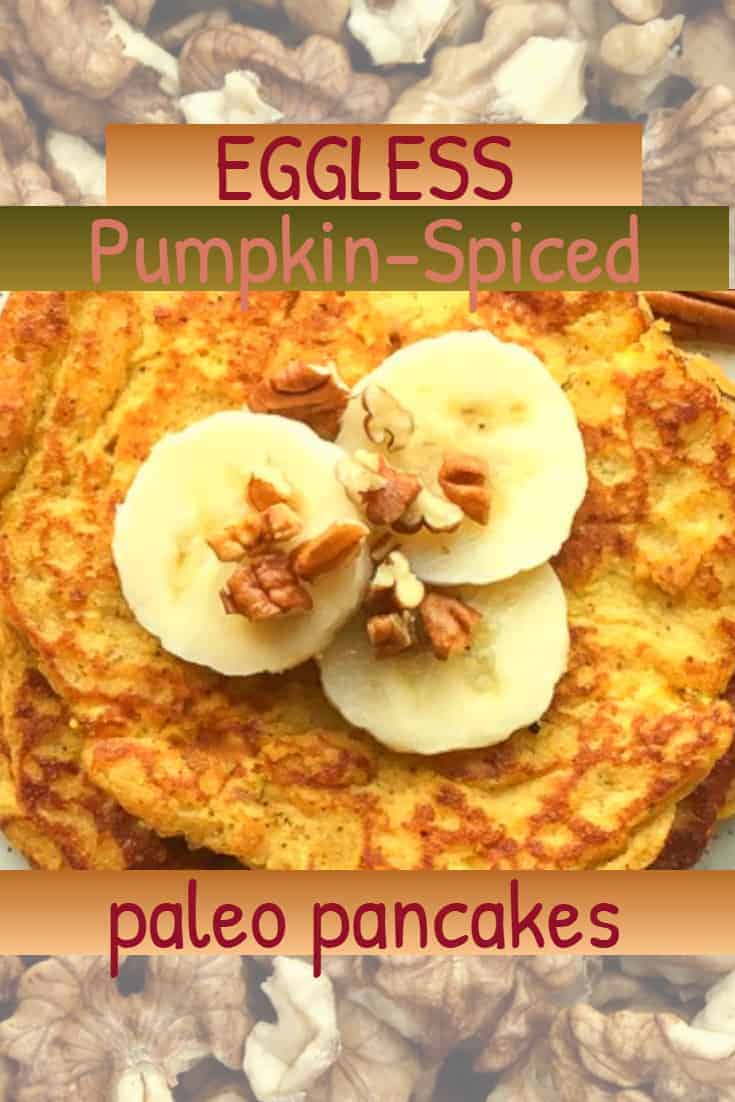 To serve, stack 2-3 pancakes on a plate. Next, top each with a few slices of banans, and chopped pecan or walnut.

Additionally, feel free to drizzle with maple syrup, I generally just pass on this!

For those that want a little more Pumpkin-Spice in their life, especially atop these pancakes, make this for a little sprinkle of fun!

Take on a teaspoon of stevia (or one packet) and mix it with 1/8 tsp of pumpkin spice. Then, sprinkle it atop your pancake with a drizzle of raw honey. YUM! 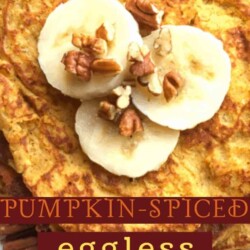 Dana Vento
Pumpkin-spiced eggless paleo pancakes are the pancakes you will become known for in your house. They are chocked full of taste and not full of garbage ingredients!
Print Recipe Pin Recipe
Prep Time 10 mins
Cook Time 10 mins
Total Time 20 mins
Servings 4